Minnesota among most affordable states for working households, but more affordable housing needed

A study released last week by the Center for Housing Policy shows modest gains in housing affordability for working households from 2009 - 2012 for many cities and states across the U.S., including Minnesota and the Minneapolis-St. Paul-Bloomington Metropolitan Statistical Area (MSA).  The report concludes that we must continue to invest in housing production aggressively, to counterbalance rising rents and home prices.

Minnesota ranks as one of the more affordable states according to the percentage of working households who are severely cost burdened by housing (defined as paying more than half their income on housing). The American Community Survey data from 2012 tracks 900,000 working households in Minnesota, of which 14% are severely cost burdened by housing. This is down from 17% in 2009. Advocacy work continues to build and preserve affordable housing and to increase the minimum wage throughout the state to help those households, a number that unfortunately is rising. 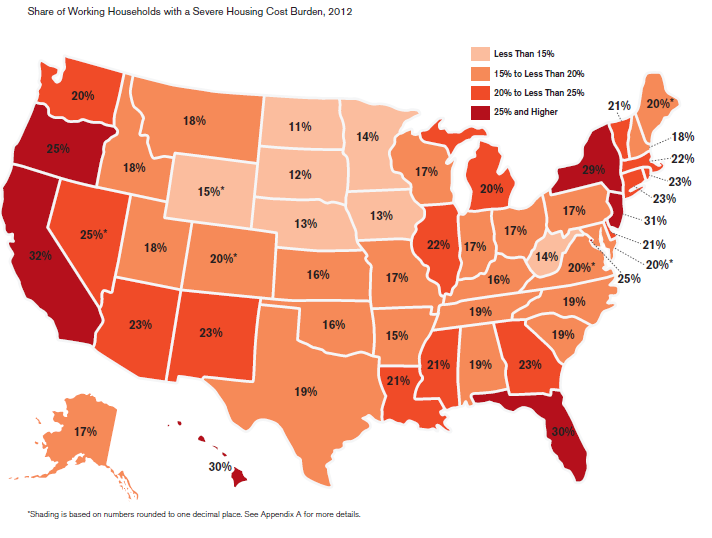 Share of Working Households with a Severe Housing Cost Burden, 2012

The same pattern holds true for Minneapolis-St.Paul-Bloomington Metropolitan Statistical Area (MSA).  Data from 2012 American Community Survey measures 608,000 working households in the MSA, of which 14% are severely cost burdened by their housing, down from 18% in 2009. This Twin Cities MSA is among the five lowest in the nation, due to many factors. Minnesota has historically been better off than the nation as a whole on this measure, but as housing advocates working in the state, we know that the need for affordable housing in Minnesota has been increasing over the past decade.

The report makes it clear that "the slight decline in the share of households with a severe housing cost burden should not be viewed as a major turnaround in housing affordability for low-and moderate-income working households". This is because the housing recovery is uneven (see news series from MHP and MN2020). We need to significantly increase affordable housing production to counteract the trend of rising rents and rising home prices, both of which combine to worsen housing cost burden for at-risk families.

For this reason, Minnesota Housing Partnership strongly supports the Homes For All request of $100 million for bonding at the state legislature. We believe that adding affordable options to the state's mix of housing is necessary to stabilize low income families and reduce costs on our public health care and education systems.