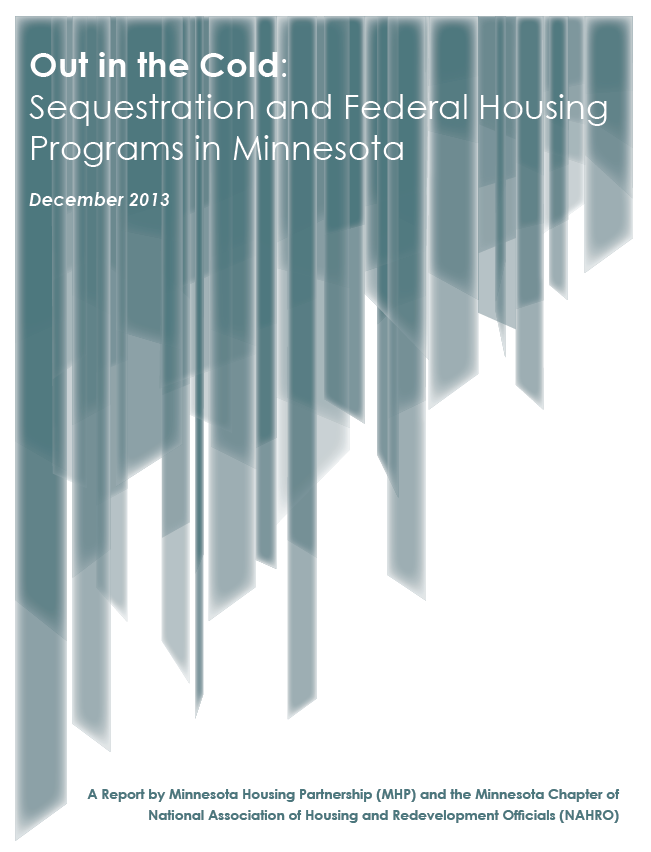 Minnesota's most important federal housing programs for low-income renters are reeling under pressure from sequestration-induced budget cuts, according to MHP's newest report, which was released this week. Since 2010, substantial federal budget cuts to the Housing Choice Voucher Program (HCV or Section 8 Vouchers) and public housing have left local housing authorities scrambling to keep their programs solvent and to provide housing assistance. Based on surveys of local program administrators, the study finds that housing authorities across the state have cut staff, cut maintenance, and left available vouchers unfilled.

The report includes findings that are hard to swallow, but it arms advocates with information to share with decision makers in support of policy change.

Out in the Cold: Sequestration and Federal Housing Programs in Minnesota investigates the impacts of budget cuts to Housing Choice Vouchers and public housing. Together these programs provide housing assistance to over 50,000 Minnesota households. Nearly 60% include someone who is elderly or has a disability, and over a third of the residents are children. The average household income for those using the programs is under $15,000 annually. Many people who use the programs have been homeless or would be at risk of being homeless if not for the programs.

Since 2014, due to sequestration and related cuts, funding nationally has been cut by 8% for Section 8 and by 25% for public housing, after adjusting for inflation. 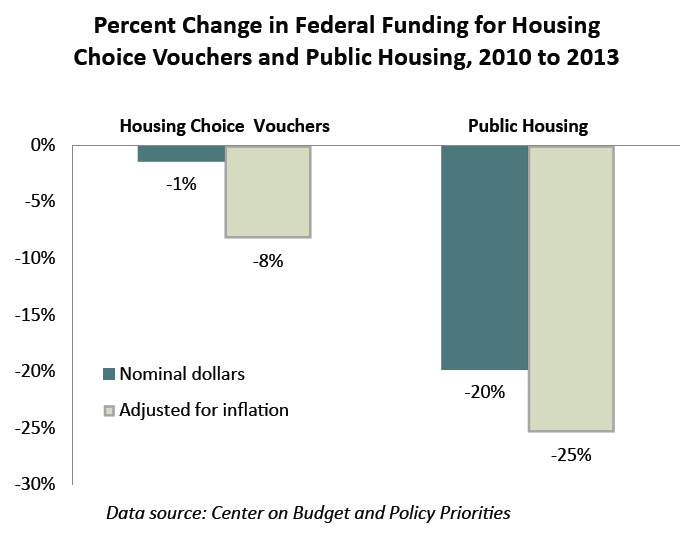 Some key Minnesota findings from the study included:

However, in some cases housing authorities have put in place preferences for higher income residents, or asked extremely poor residents to move to less expensive units or pay more for their units.

Unfortunately, the situation is set to worsen if sequestration continues. Housing authorities have tapped their program reserves over the last several years for Section 8 and public housing. As these reserves dry up, our housing authorities are likely to see a marked decline in their ability to serve homeless Minnesotans or those in precarious housing situations.

The Center on Budget and Policy Priorities predicts that Minnesota will lose at least 2,500 vouchers by the end of 2014 if sequestration continues. Losing this many vouchers would leave over 6,000 people out in the cold. What will our neighbors do then?

Given these unfortunate findings, what should we do? Our hearts go out knowing so many Minnesotans are in dire housing straits. The study also lends urgency to the need to support federal and state policy changes for housing. We hope you will take the information in the report and use it to help advocate for:

Please contact ThaoMee Xiong at This email address is being protected from spambots. You need JavaScript enabled to view it. to get involved.

The Out in the Cold report was produced by MHP in cooperation with Minnesota NAHRO. MHP and NAHRO are deeply grateful to all the housing authority administrators who took the time to respond to the survey. Read the full report at http://mhponline.org/publications/reports-and-research/442-out-in-the-cold-sequestration-a-federal-housing-programs-in-minnesota.