Why does creating affordable housing cost so much, and what do we do about it?

The panelists spoke to balancing the imperative for top quality affordable housing that works well for communities and residents, with that of investing increasingly scarce dollars wisely, in a climate of serious need for affordable housing. 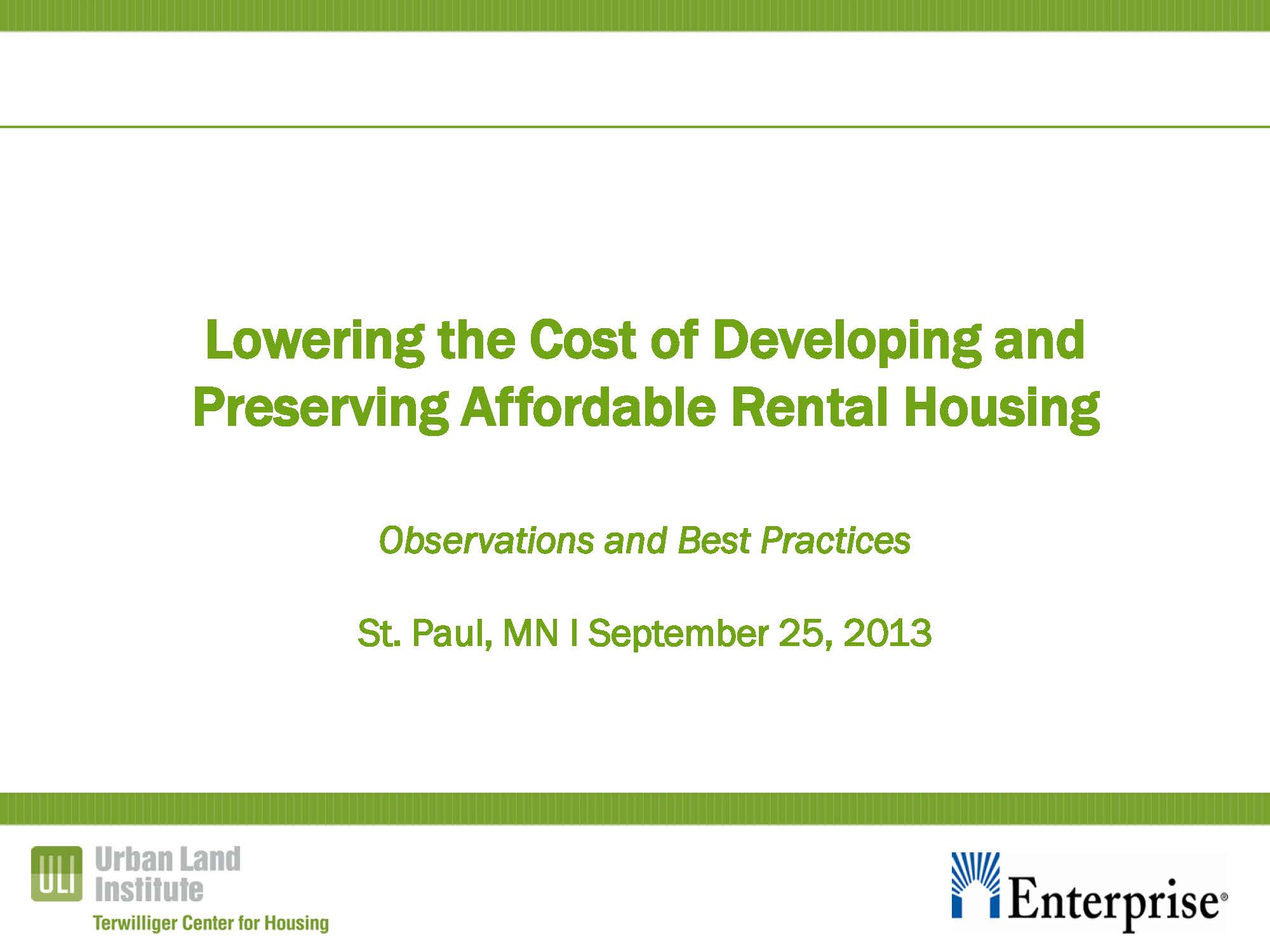 Michael Spotts reviewed preliminary findings of national research he's conducted at Enterprise with the Urban Land Institute to understand cost drivers and best practices in lowering the cost of developing and preserving affordable rental housing.  Spotts and fellow researchers held focus groups, and conducted site visitsand interviews across more than 20 cities. What he found is that cost drivers can be grouped into five broad categories, each described briefly below.

Asked to speak to the best innovations outside of Minnesota for reducing inefficiencies and containing costs, Spotts mentioned two key innovations. 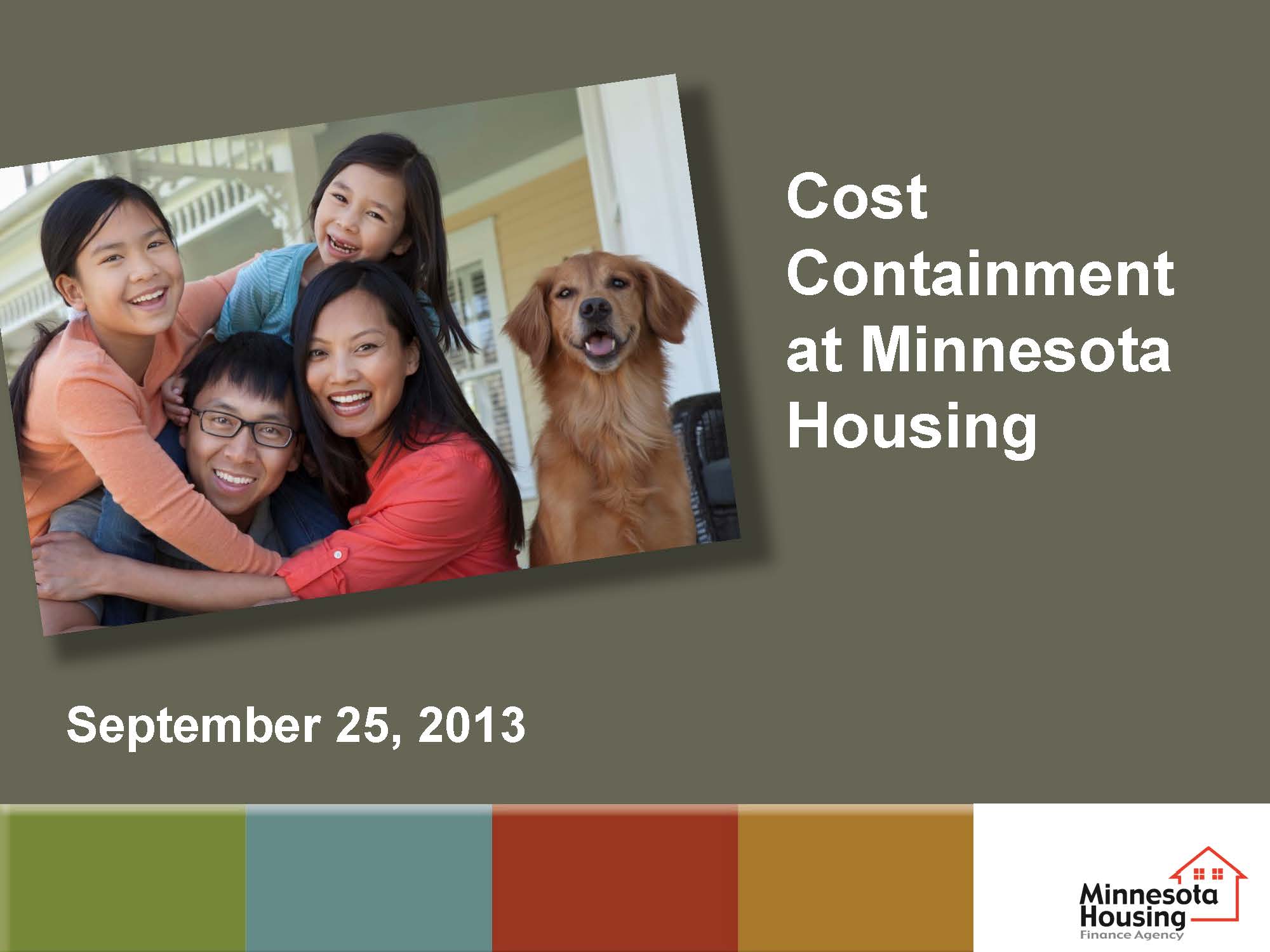 Minnesota Housing's uses a predictive cost model which incorporates 18 factors, such as location, size, number of units, financing sources, population served, and new vs. rehab, to help the Agency assess the appropriateness of costs in proposed developments. When the cost of a proposed project is more than 25% higher than predicted by the model, the project is flagged and reviewed to see if or how the higher costs might be justified.

Last year for the first time, regular low income housing tax credit properties could earn extra points in their tax credit application scoring (QAP) for coming in in the bottom half of applications based on per unit cost, compared to projects in the same category type. The idea has been to reward cost effectiveness. At the same time, the Agency has sought to retain quality in developments by adding only a few points for low costs.

To assess the impact of the new cost containment measures, Minnesota Housing, with MHP's assistance, surveyed tax credit applicants specifically how about the new QAP scoring impacted their approach to development. Twelve responses were returned from the 26 surveys sent out.

Many developers did not take additional cost containment measures because they felt they were already doing so, and did not want to impact the quality of housing. One survey respondent suggested that the Agency consider costs of the entire life of a project (lifecycle costs) rather than just development costs.

Finally, Patterson shared findings from an intern project on cost trends. Looking at 400 rental housing projects funded by Minnesota Housing over ten years, overall costs have been flat over the decade (after adjusting for inflation) and showed a small decline in 2010-12. This was found to be driven in part by more emphasis on rehab projects and projects that don't use tax credits. New construction costs, on the other hand, have increased. At least one audience member noted that the recession may also have contributed to flat costs, but that more recent project costs appear to be rising.

Patterson concluded that cost containment is working relatively well, considering  the need to balance this with other objectives/priorities. Most developers are holding off on additional cost containment measures, but the scoring structure is still capable of promoting creativity in this area. Several recommendations coming from the study, such as including lifecycle costs in this analysis and collaborating in addressing unnecessary costs, will be considered by Agency staff, Patterson reported.

Finally, Minnesota Housing Commissioner Mary Tingerthal praised Enterprise for its leadership and national advocacy around the Low Income Housing Tax Credit and for doing this type of research so we can better tell the story of housing costs. She reiterated several of Patterson's points, and expressed some frustration around not knowing how best to control project "soft costs," such as attorney and other fees. She posed two questions to the audience, which included many developers and industry professionals:

Several audience members, such as John Duffy of Duffy Development, responded positively to the idea of meeting and praised the Agency for responding quickly with necessary paperwork in order to get projects underway. Others cited cases in which projects were held up due to slow responses by the Agency, or by other lender processes and regulations. All appreciated the exchange of ideas and seemed interested in creative solutions to improve development efficiencies and outcomes.

To view the PowerPoint presentations of presenters or learn more about the Investors Council click here, or contact Dawn Goldschmitz at 651-925-5544.