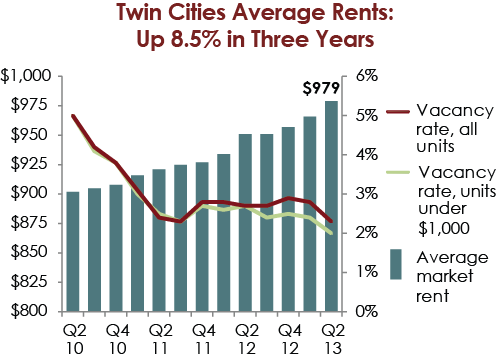 In a heated housing market, rents in the Twin Cities have been rising at the fastest rate since the early 2000s. Rents have increased 8.5% in the last three years, and now average $979 per month, according to data in the our newest "2 x 4" Report, which covers the second quarter of 2013.

As the cost of housing rises, renters with limited incomes are facing an ever more serious shortage of apartments affordable to them. Fully 98% of area apartments renting for under $1,000 are already occupied, the report says. 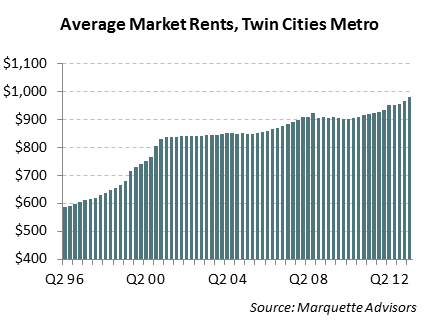 Under these tight market conditions, additional rent increases can be expected. This is disturbing news for those concerned about homelessness, and the data already bears out increases in homelessness.

The report states that during the 2013 school year, 9,889 children were identified as being homeless by four major school districts: Duluth, St. Paul, Minneapolis, and Rosemount-Apple Valley-Eagan. In Hennepin County, the number of families seeking shelter in county-contracted shelters rose to 355. In just a single year, the schools' count rose by 7%, and homeless families in Hennepin County were up by 17% 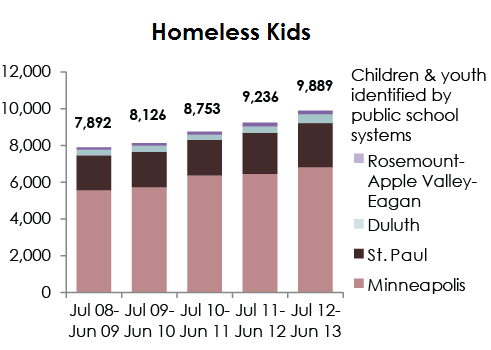 These increases serve as a sobering reminder that even with all the good work being done to house people affordably in Minnesota, there is an urgent need for additional investment in rental homes that lower-income Minnesotans can afford.

As Chip Halbach stated for the 2x4 press release, "We are entering a critical period for housing in Minnesota, and the risk is that lower income Minnesotans will fall further behind."  He added, "The Twin Cities is a bellwether for the rest of the state, where rental options are already inadequate to meet local needs."

See the full "2 x 4" Report, including additional data and analysis on the rental market, the owners' market, homelessness, and the housing industry as a whole at http://mhponline.org/publications/reports-and-research/2x4-report.  Also check out Chip Halbach on Minnesota Public Radio discussing the 2x4 Report.