In a time of rising inequality, it's fitting that this month's resources roundup features two studies of disparate housing impacts on whites versus people of color. One finds that housing discrimination has declined over time, but persists in subtle yet impactful ways. Another finds that Minnesota households in areas with higher concentrations of people of color lost nearly three times more wealth per household than those in segregated white communities in 2012. Other resources reveal a surprising correlation between evictions and children, the concerns of rural Minnesotans, housing unaffordability for those with disabilities, and a linkage between high home rates and unemployment down the line. 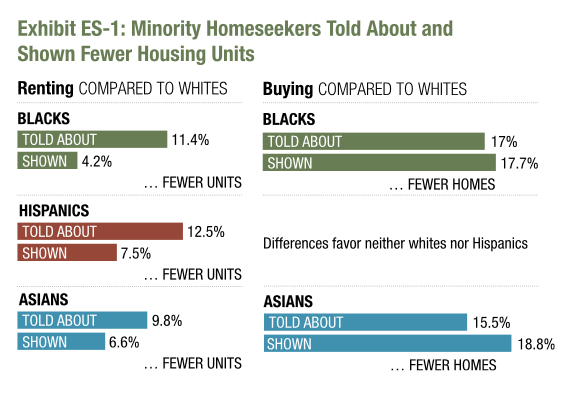 The latest HUD study shows that while blatant discrimination by realtors and landlords is on the decline, subtle forms of discrimination against people of color persist. Minority and white home-seekers were equally able to make appointments to see apartments or homes.  However, while meeting with landlords or realtors, testers of color were told about fewer available housing units than equally qualified white testers.

This study by the Home Defenders League and the New Bottom Line examines the racialized impacts of foreclosures in 2012 using two approaches: 1). It analyzes the impact of foreclosures in ZIP codes with populations of people of color greater than the national average o

This study by scholars at Harvard University, Indiana University, and Michigan Technological University found that children are, unfortunately, a risk factor for eviction, even after controlling for how much rent tenants owed, race and single-mother households. This means that advocates should not only focus on the freedom to obtain housing, but also the freedom to maintain housing.

Rural Pulse: a snapshot or rural concerns, perceptions, and priorities of rural Minnesotans

Rural Pulse is a Blandin Foundation research study that takes a snapshot of the concerns, perceptions and priorities of rural Minnesota residents. In March 2013, more than a thousand rural Minnesotans (in communities under 35,000) participated in the project.

The need for attracting new, high-quality jobs is the top priority for a third of rural Minnesotans.  Other big concerns include educational opportunities (18%) and growing local business (12%). Housing was cited as the most critical concern by only 5% of people, but history shows that with job booms, comes the need for housing.

This report by the Consortium for Citizens with Disabilities (CCD) Housing Task Force and the Technical Assistance Collaborative (TAC) illustrates the affordable housing crisis affecting millions of people with serious and long-term disabilities who rely on federal Supplemental Security Income (SSI) payments for their basic needs.  The report shows that it is virtually impossible for people with disabilities receiving SSI to obtain decent, safe, affordable, and accessible housing in the community without a permanent housing subsidy.

This surprising study commissioned by the Peterson Institute finds that rises in the homeownership rate in a U.S. state are a precursor to eventual sharp rises in unemployment in that state.  How can this be?  The authors attribute this to three factors: (i) lower levels of labor mobility, (ii) greater commuting times, and (iii) fewer new businesses.