Home Prices Are Up, But So Is Homelessness, Finds Latest 2x4 Report 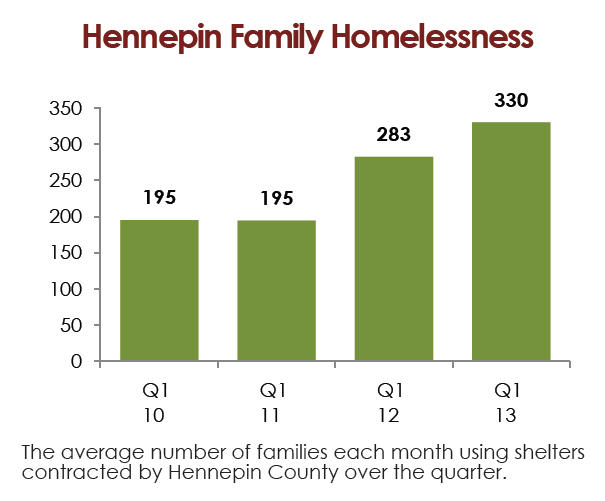 hennepin homelessness q1 2013More families are finding themselves homeless, and for longer periods of time, according to MHP's latest 2x4 Report. While rising home prices are great news for homeowners, the report's data highlight disparate impacts for those with jobs and affordable housing, and for those without.

Some key findings from the newest 2x4 Report included: 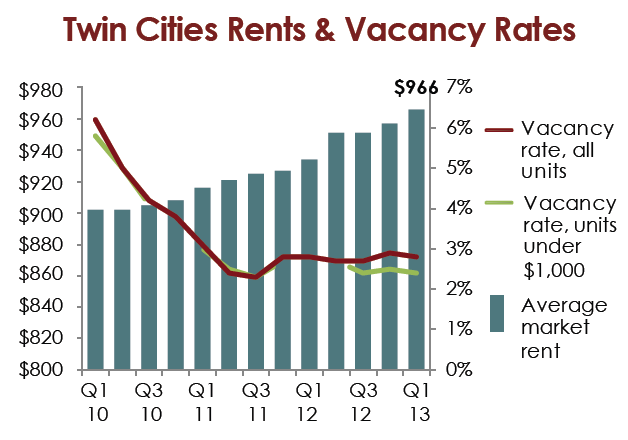 So what's behind this? Economic drivers appear to be powering much of the change.

Lisa Thornquist of Heading Home Hennepin notes that the barrier of low vacancy rates and high rents may help explain why families are finding themselves homeless for longer lengths of time. With such low rental vacancy rates, landlords can afford to be highly selective.

In addition, job seekers often cannot find living wage jobs. For Minnesota job vacancies, the median wage of only $13.14 per hour, would allow workers to afford rents of only about $680. And half of the state's job openings pay less than the median. Limited employment options for MFIP recipients are also likely playing a role in higher homelessness for families.

The report underscores the importance of public policy in ensuring that renters, and not just homeowners, benefit from economic gains.

"The findings of the report remind us why public investment is so urgent. We are very pleased that the 2013 state legislature has shown a commitment to addressing affordable housing shortages and homelessness," said Chip Halbach, Executive Director of MHP.

But advocates will have more work to do during the next legislative session, as well as at the federal level.

Questions about the "2 x 4" Report? Contact Leigh Rosenberg, MHP's Research and Outreach Manager at 651-925-5543 or This email address is being protected from spambots. You need JavaScript enabled to view it. for more info.