$33 million boost for housing and homeless services in state budget

Housing advocates have a lot to celebrate at the close of Minnesota's 2013 legislative session. All together, the budget passed by the legislature for 2014-15 includes $33 million more to help thousands of Minnesotans secure safe and stable housing. There's also been movement on tax measures impacting housing.

The Homes for All Coalition, which grew to 80 organizations from across the state by the end of the legislative session, brought the attention of our lawmakers to the state's growing housing needs.

At the Homes for All post-session press conference on May 22, Minnesota Housing Commissioner Mary Tingerthal congratulated Homes for All saying, "Housing was on the lips of legislators until the bitter end." And fortunately, the end was not bitter at all.

Lawmakers increased funding for affordable housing and homeless services of Minnesota Housing and the Department of Human Services by a total of $33 million for 2014-15. Of this, $28 million of this increase went to priorities advocated by the Homes for All coalition.  These investments will make a difference in the lives of children and families a 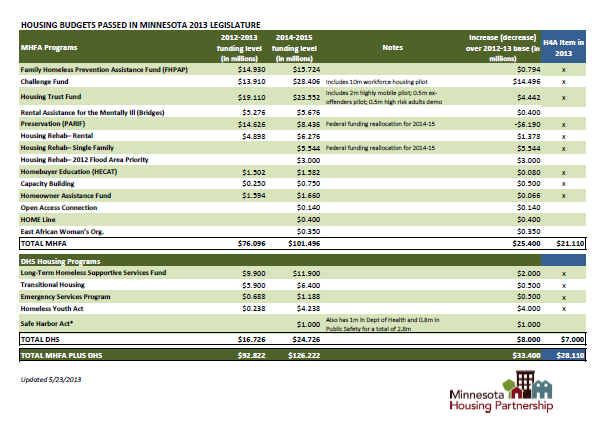 At the May 22 press conference, Representative Isaacson added, "The bill I'm the most proud of was being a part of getting this $33 million for housing and homelessness."

Nearly all of the Homes for All priority programs saw increases, as did a few additional programs. In the Minnesota Housing budget, the largest increases went to the Challenge Fund and the Housing Trust fund.

For the Department of Human Services, the Homeless Youth Act and Long-Term Homeless Supportive Services had the most substantial budget increases, which measured $4 million and $2 million, respectively.

For additional funding details on affordable housing and homeless programs of the MN Housing and Department of Human Services programs CLICK HERE.

For additional quotes from housing leaders, see the Homes for All press release.

Despite the best efforts of Homes for All and legislative champions, the pared down bonding bill of only $176 million that passed in the final hours of the legislative session failed to include housing. $50 million in bonds for public housing rehabilitation and affordable housing, which had been advocated by Homes for All, had been part of the larger $800 bonding bill that fell five votes short of passage three days before the close of session.

Representative Alice Hausman, Chair of the House Capital Investment Committee and author of the omnibus bonding bill, was disappointed that the scaled back bonding bill included bonds for capitol restoration but not housing.  "It's a little hard for me to give up housing, when I think we're restoring this building, the People's House, when at the same time 25% more people have no house," Hausman said.

In addition to the Homes for All items, MHP worked on two important housing tax policy issues.

First, as part of the omnibus tax bill, the legislature extended the sunset for the state's historic tax credit to 2021. Through this tax credit the state matches the federal 20% credit for rehab costs of historic properties. A significant portion of the current credit has been used to create affordable housing. It was to sunset in 2015, and will now be available until 2021. This extension provides a major benefit for developers of historic properties, because it normally takes several years to get approvals and funding lined up for redevelopment. The current sunset did not provide the time cushion required by developers to justify front end costs.

Secondly, the 4d rental property tax classification, which lowers property taxes on affordable housing, was amended to address cash problems occurring for 4d properties located in areas experiencing rising property tax values. A second tier of market value for class 4d property was established that lowers the tax rate from 0.75 percent to 0.25 percent for the portion of the assessed value of an affordable housing unit that exceeds $100,000.  This two-tier system will prevent owners of these 4d properties from paying an unreasonably large proportion of their rent-restricted income on property taxes. The Commissioners of Revenue and Housing Finance will report back to the Legislature in 2015 on the implementation and impact of this new two-tier market value system.

Thank You for your Advocacy!!

And last but not least, thank you! We want to extend our gratitude to all the MHP supporters who contacted legislators or helped in other ways this session.  Your personal calls, letters, emails, and meetings with legislators and the media helped secure these important investments in Minnesota's families and communities! And kudos to all the Homes for All organizational partners, who made so much of the work possible this session.