The latest 2x4 Report was released today, with findings that remind us that though the economy has improved for some, many others are being left behind. In sum, record numbers of homeless families sought shelter in Hennepin County, while rents continued to rise. On the other hand, falling foreclosures and mortgage delinquencies spelled good news for the beleaguered home ownership market.

There were many data records set this quarter. On the positive side for owners:

And on the not-so-positive side, rents are rising, and more families are facing homelessness:

With these divergent trends, it reminded us that sensible housing policy would help bridge the gap between higher income home owners, and renters and homeless folks struggling to meet their basic housing needs. The state and federal policy initiatives that MHP is working on would be steps in the right direction. 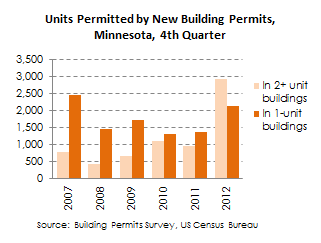 building permits 4thqA couple of other notable findings: Serious employment disparities persist, making housing instability more likely for some than others. On employment measures, Minnesota ranked 14th (out of 50 states plus DC) for white workers, but 37th for African-Americans.

Be sure to read the full 2x4 Report for details!