MHP has surveyed the latest tools and articles to locate those that might be of interest to MHP Connect readers. This month's resources include Wilder's research on Minnesota homeless data, a bipartisan report recommending several key federal housing policy changes, HUD's Worst Case Housing Needs report, a report that demonstrates the efficacy of foreclosure prevention counseling, and a local report that illustrates the cost of foreclosures.

Every three years, the Wilder Foundation conducts Minnesota's preminent study of homelessness data. On March 6, Wilder released the first round of data from its most recent counducted on a single day in October 2012. The data shows that the number of homeless people by 6% from 2009 and that 46% of Minnesota's homeless population is aged 21 or younger.  Stay tuned for the release of more detail on the demographics of homelessness in Minnesota in April.

After over a year of deliberation, the Bipartisan Policy Center's Housing Commission released its report, "Housing America's Future: New Directions for Housing Policy."  As stated in BPC's press release, the report "proposes a new housing finance system that calls for a far greater role for the private sector, a continued but limited role for the federal government, the elimination of Fannie Mae and Freddie Mac, and reform of the Federal Housing Administration to improve efficiency and avoid crowd-out of private capital." The report also takes up housing policy ranging from rental, to home ownership to rural housing to aging.

Interested in learning more about the report from Rep. Keith Ellison and Barry Zigas, one of the authors of the report?  Then attend MHP's April 4th event, A Conversation on the New Direction of Housing Policy. 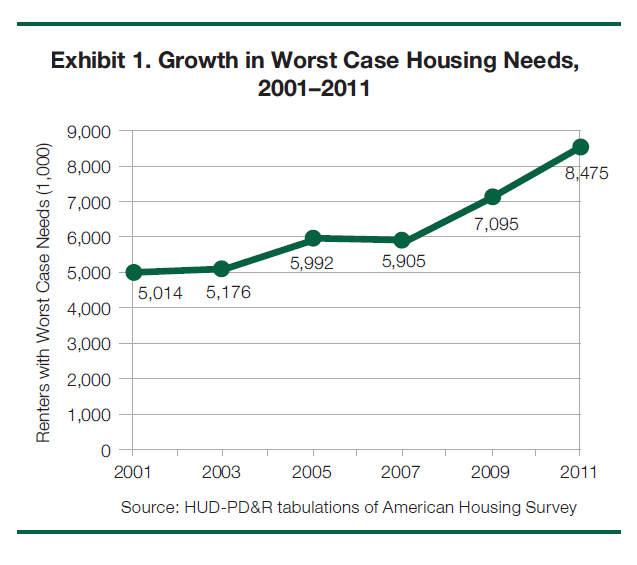 On Monday, February 25th, HUD released its full 2011 "Worst Case Housing Needs" report. "Worst case housing needs" means renters who pay more than 50% of their income on housing or who live in severely inadequate housing conditions, or both.  This shocking report reveals that 8.48 million renter households experience "worst case housing needs," a 19% increase since 2009 and a 43.5% increase since 2007.

Minnesota Homeownership Center recently released its report, "2012 Foreclosure Counseling Program Report." The report found that 47% of households receiving counseling services in 2012 were able to avoid foreclosure. More than half of households served fell behind in their mortgage due to a loss or reduction in income.

A report released on February 27 by ISAIAH, Jewish Community Action, Northside Community Reinvestment Coalition, Neighborhoods Organizing for Change, and Minnesotans for a Fair Economy, shows the fiscal and social impact that foreclosures have on Minnesota communities. The report, called "The Wall Street Wrecking Ball: What Foreclosures are Costing Minnesotans and What We Can Do About It," highlights that between 2008-2012, 94,000 children were affected by foreclosures; $20.7 billion was lost in home values; and local governments had to pay $1.5 billion as a result of foreclosures.