89 Hours a Week to Afford Rent? Out of Reach 2013 Report Released 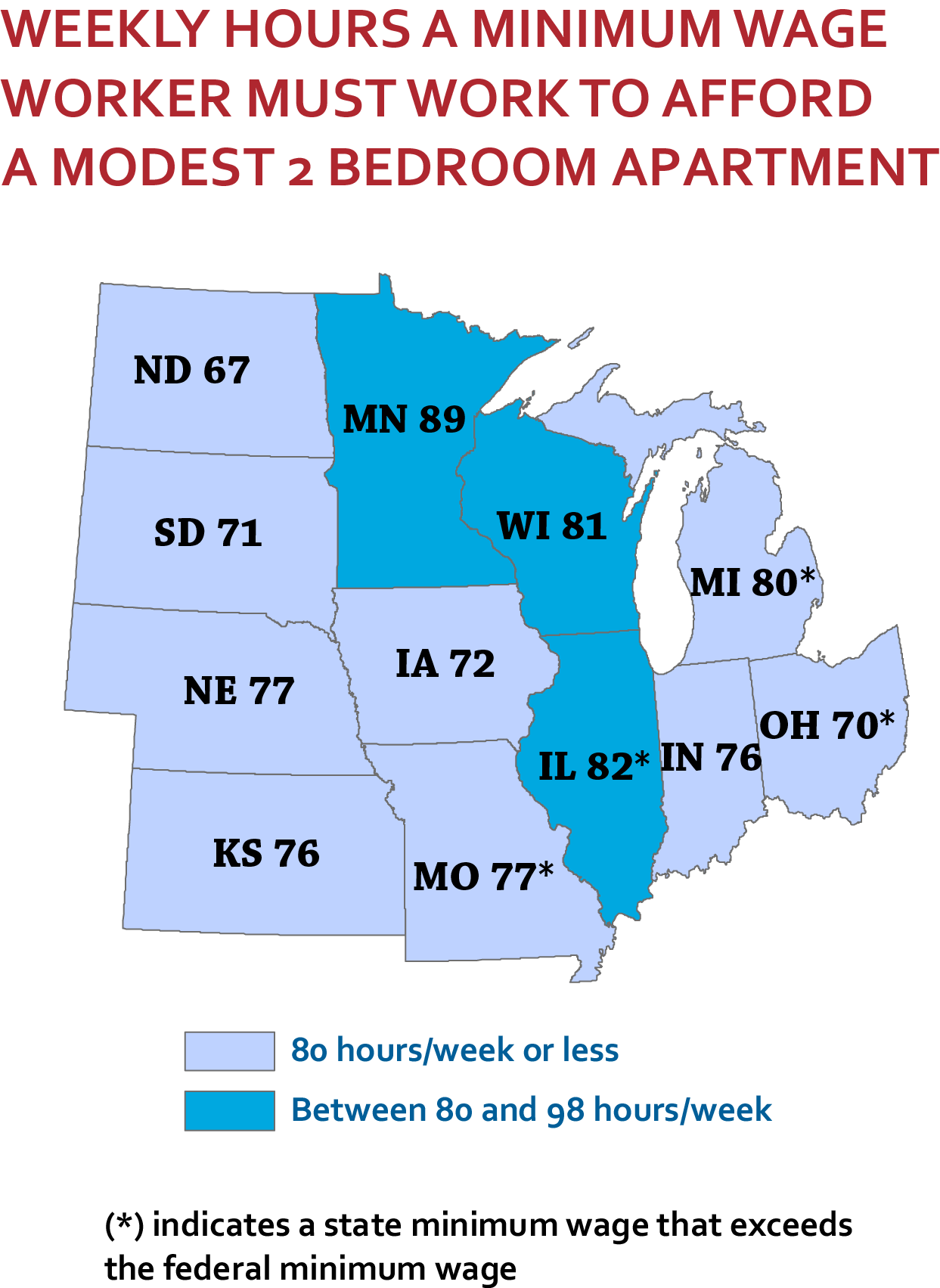 According to the Out of Reach report for 2013 released this week, a minimum wage earner in Minnesota would have to work 89 hours per week – or hold 2.2 full time jobs -- to afford a modest two-bedroom apartment. Of the twelve states in the Midwest, Minnesota has ranked the worst for affordability for minimum wage workers for three consecutive years.

The annual Out of Reach report by the National Low Income Housing Coalition provides rental affordability data for every state, metro area, and county in the US. MHP's Minnesota-specific report includes state data, including three Minnesota maps.

In order to afford the rent and utilities for a safe, modest 2-bedroom apartment in the private housing market, a Minnesota worker would need to earn $16.08 per hour, 40 hours a week, all year long.  By contrast, the typical renter household in Minnesota earns the equivalent of $14.09 per hour. Federal minimum wage pays only $7.25 per hour.

The report underscores the urgency of passing legislation to ensure that resources are available to make housing affordable to renters, at both the state and federal levels.

The 2012 Wilder Research study on homelessness released just last week showed that the number of homeless Minnesotans counted on a single night in October topped 10,000 – the highest in 30 years of research. Children and youth are the most likely to be homeless, the Wilder report found.

High and rising rents, coupled with falling incomes over time for renters, are the context in which housing has become literally out of reach for thousands of Minnesotans. No area of the state is exempt. An estimated 55% of renters in Minnesota do not earn enough to afford a two-bedroom unit at the "fair market rent" where they live, the Out of Reach 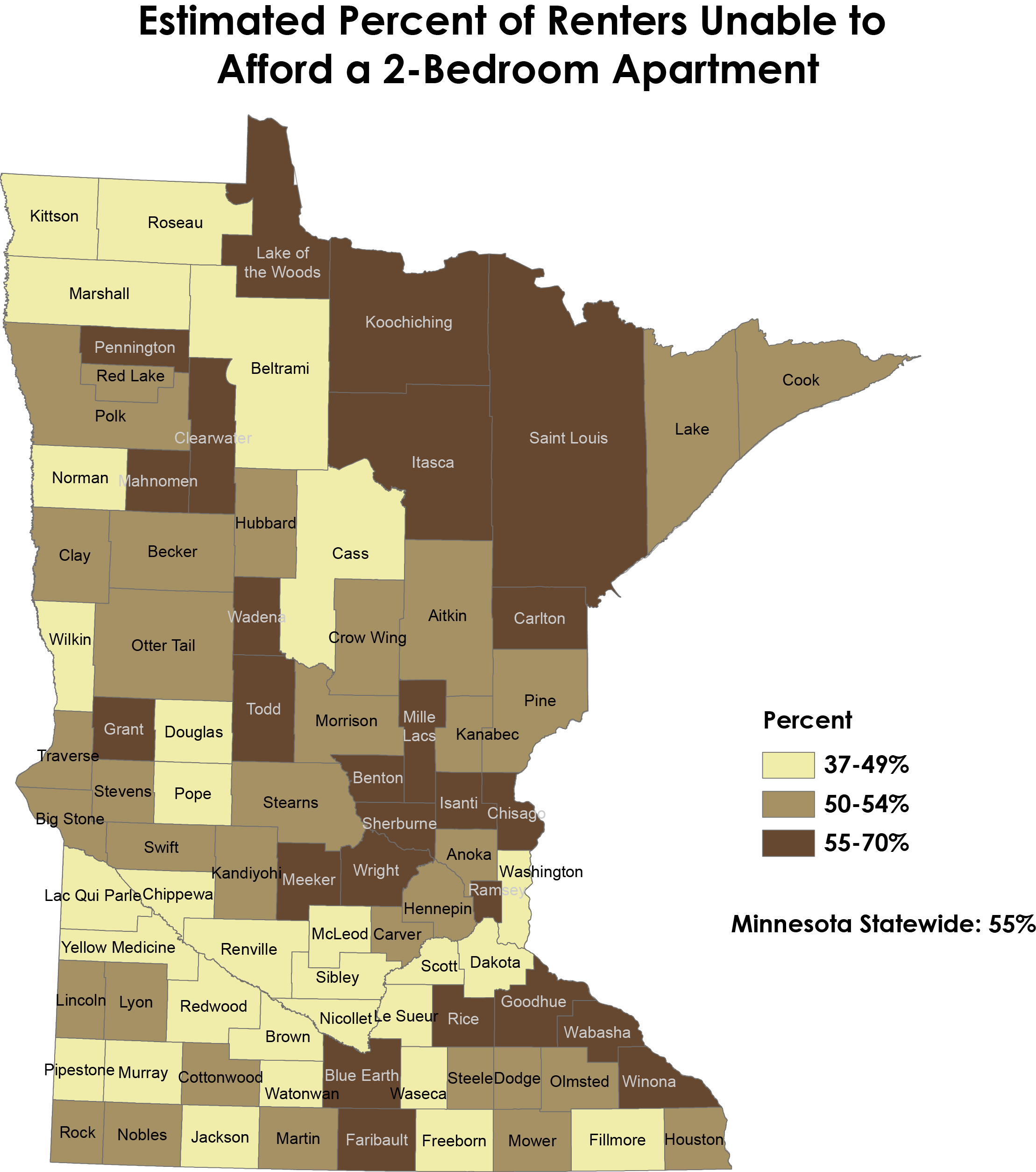 Out of Reach data is available for every county and metro area in the country. Here's a look at how Minnesota counties compare with each other.

The counties least affordable to renters, given the incomes they earn, are distributed throughout Minnesota. For 2013, the counties with the highest estimated percent of renters unable to afford a modest two-bedroom apartment are Mahnomen (70% unable to afford), Winona (68%), Carlton (68%), Lake of the Woods (68%), Wadena (66%), and St. Louis County (62%). In the 7-County Metro, the county least affordable to the renters living there is Ramsey (60%).

Click here for additional Out of Reach 2013 Minnesota maps and data for the 87 counties and all the metro areas from MHP.

Click here for national data, analysis, and maps from NLIHC.

For those following the state minimum wage debate, if $9.50 per hour minimum wage legislation were passed in Minnesota, as has been proposed, the state would move from the worst position in the Midwest for low wage workers for housing affordability to the second best. Yet even with this new wage, affording a 2-bedroom apartment would require a minimum wage worker to put in 68 hours a week.

Contact Leigh Rosenberg, Research and Outreach Manager at This email address is being protected from spambots. You need JavaScript enabled to view it. or 651-925-5543 for assistance in accessing or analyzing Out of Reach data for any county or metro area of Minnesota.