Hopeful Signs for Housing Market but Not Homelessness in 2x4

This quarter's 2 x 4 Report suggested a few rays of light reaching the beleaguered housing market, but the night darkened for the homeless in Q1 2012. The number of families in Hennepin County contracted shelters grew by 45% compared to just one year ago. At the same time fewer homes on the housing market brought more home price stability. 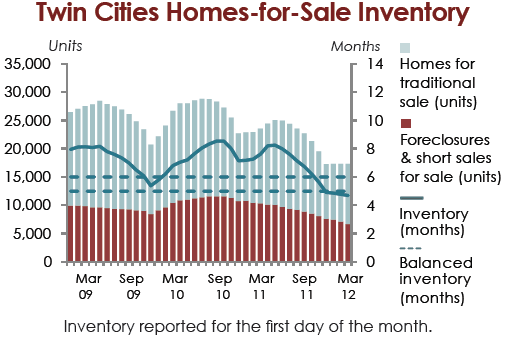 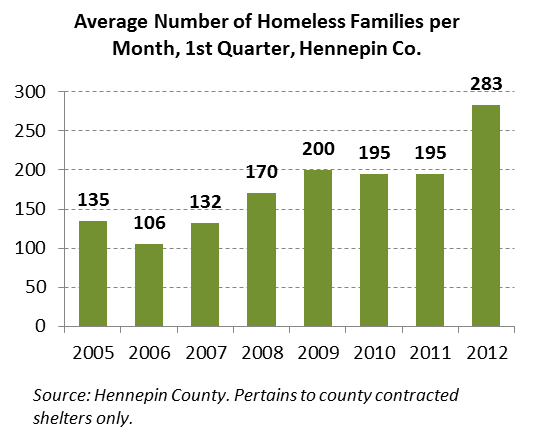 with the inventory of homes for sale in the Twin Cities reaching an eight-year low this quarter. An average of about 17,300 homes, or 4.8 months of supply, was for sale, according to Minneapolis Area Association of Realtors data. Prices, which have long been plummeting, began to stabilize under the influence of reduced inventory. Median sales prices fell only modestly in January and February, and actually increased in March in year-over-year comparisons. See the full 2x4 Report for graphs and additional analysis.

Homelessness, with its tragic consequences for adults, families and children, grew more severe this quarter. Rising rents coupled with people dropping out of the labor force for lack of opportunity are the likely causes. An average of 283 homeless families sought shelter in Hennepin County contracted shelters each month. This figure was 45% higher than last year and 168% higher than 2006 for the first quarter. Homelessness among children in the Duluth, St. Paul and Minneapolis public schools was also up. 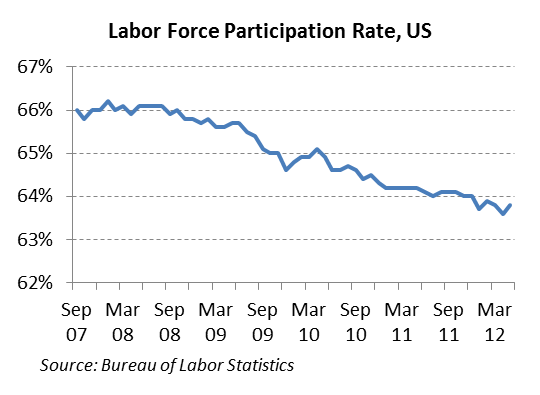 It's hard to know what's responsible for the rise in homelessness, but one place to look is the labor force participation rate. Unlike the unemployment rate, which measures only people who are actively looking for work, this rate measures those in the labor force as a share of the working age population. This labor force participation rate has been falling steadily since the recession began, and may well explain the rising homelessness we're seeing. Many people have become so discouraged by their job prospects that they have quit looking for work. Without work or housing assistance, the rent can't be paid.

See the full 2x4 Report for other highlights from Q1 2012 including data and analysis on:

MHP's "2 x 4" Report graphically depicts 2 sets of indicators for each of 4 key housing areas: the home ownership market, the rental market, homelessness, and the housing industry. Through quarterly updates, the report provides a concise overview of housing challenges facing Minnesota.