{jcomments on} Right after Christmas, the Star Tribune published an article about West St. Paul's new ordinance to limit the number of rental properties allowed on each block. Today, the lead editorial was on the same issue. West St. Paul is not alone - Winona and Mankato have passed similar measures in their communities. Meant to protect the value of single family homes, the approach is not without considerable controversy. Many argue that it's a fundamental property right for an owner to be able rent out his or her property. Others are concerned about the impact on renters when affordable housing is already in short supply.

See below for some comments made by MHP staff in response to this story. What do you think?

Here are a few excerpts from the Strib article, but we encourage you to read the whole thing. 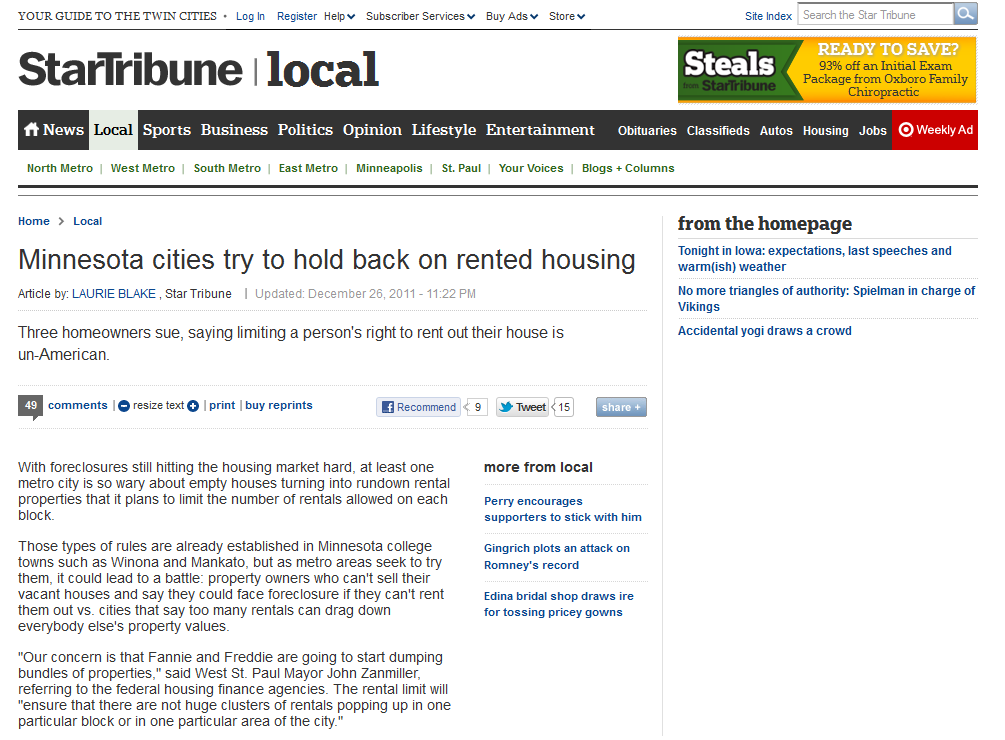 West St. Paul officials say they turned to the rental limit to help stabilize neighborhoods and protect property values for single-family homeowners. They say they're trying to keep the city's 40 percent rental rate from rising in the face of a growing tide of foreclosures and vacant houses.

One voice in opposition:

But Rick Duffy, a West St. Paul resident and Realtor who is renting a house in the city with his fiancée, said a cap on rentals may make it hard for retirees to sell homes. And, he said: "It just fundamentally doesn't feel right. I don't think it is a fair statement that renters degrade a neighborhood."

We've asked MHP staff to post their thoughts. Join in this important discussion regarding the place of rental housing in Minnesota communities.