Resources this month consider housing under the big tent of sustainability. Check out data and reports on energy usage and costs of housing types located in different types of areas, new data on homelessness in Minnesota for 2010 (it was far more than in 2007), progress as measured by Met Council's housing benchmarks, and more.

Just How Much Energy Is Saved by Locating Housing in an Area with Good Transit?

The cost tradeoff between housing and transportation costs based on the location of housing is increasingly in the public eye. A recent study, Location Efficiency and Housing Type, shows considerable benefits of coordinated transportation and housing planning. The authors compare the amount of energy used annually by households in three different housing types (single-family detached, single-family attached, and multifamily homes) within auto-dependent, low-density suburban developments, versus compact, transit-oriented developments. Energy-efficiency features in homes and automobiles are also considered as an option. The results show that households in higher-density, transit-accessible developments use far less energy and have lower transportation and energy costs. The highest reduction in overall energy use is seen in multifamily homes located along transit lines. Energy-efficiency improvements did reduce energy usage, but were not as important as housing location and type. 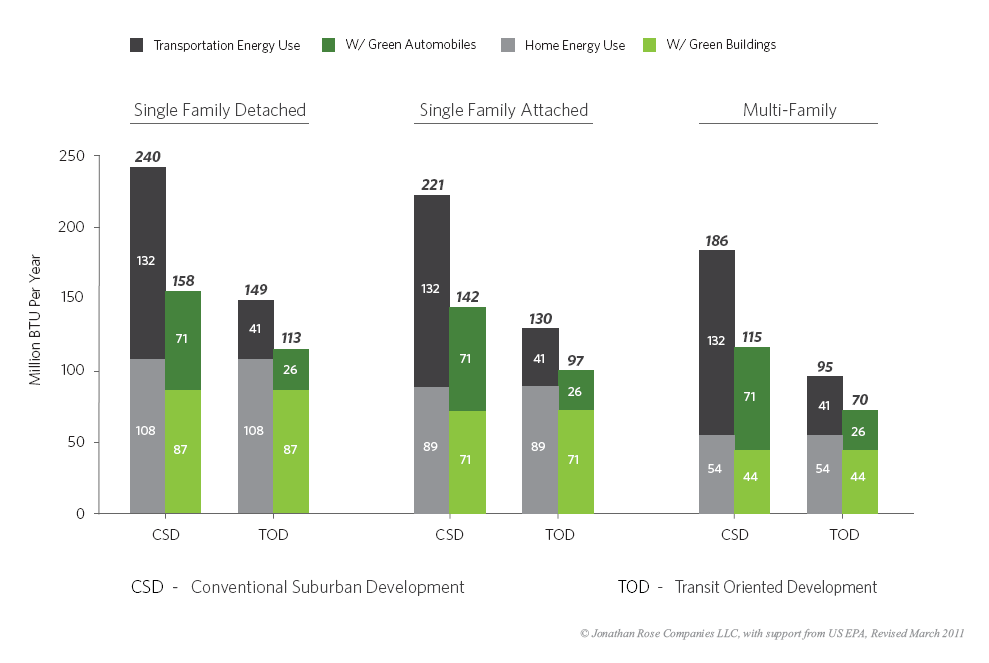 With projects underway like the Central Corridor light rail in the Twin Cities, public transit is a topic in the forefront of  community discussions. In August, the Center for Housing Policy released a summary of research evaluating the impact of  public transit and transit stations on the cost of housing. The report, Public Transit's Impact on Housing Costs: A Review of the Literature, finds that access to public transit generally leads to higher housing costs, though research findings vary considerably. The report also pinpoints factors likely to lead to higher housing costs, such as a strong housing market and economy, zoning and public policies supporting high density and mixed use development, and a robust public transit system. For communities looking to mitigate the effects on housing costs, strategies such as inclusionary zoning and land banking are recommended. 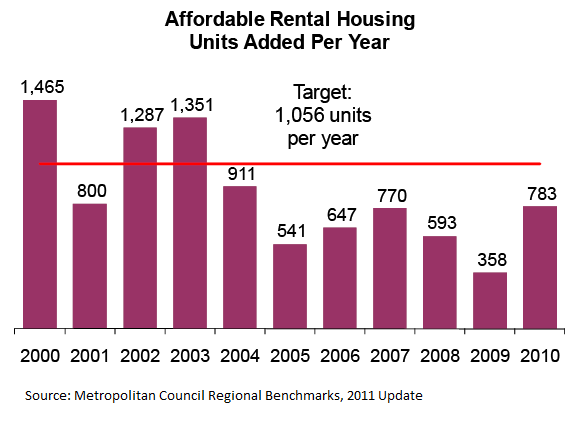 In 2004, the Twin Cities' Met Council adopted the 2030 Regional Development Framework to help guide the region's expected growth of 1 million people by 2030. To measure progress, a series of benchmarks are updated annually. The most recent was released in September. For housing, benchmarks consider the overall owner and rental units added, affordable units added, and homeownership affordability. The measures for units added and affordability generally fell short of their annual goals. See the full report for details and more charts such as this one.

Homelessness in Minnesota Worsening Faster than in US

Data compiled by HUD to inform the battle against homelessness currently comes from local point-in-time counts of sheltered and unsheltered homeless persons on a single night and annual estimates of sheltered homeless, using Homeless Management Information Systems (HMIS). Unfortunately, the data suggest that Minnesota homelessness is worsening faster than in the US as a whole. From 2007 to 2010, Minnesota point-in-time estimates of homeless people increased by 7.6%, compared to a 3.3% reduction for the US. Even in the single year from 2009 to 2010, Minnesota fared worse, with homelessness up 2%, compared to a 1.1% rise for the nation. Nationwide, data estimates from shelters show that homelessness in rural and surburban areas was on the rise, while the number of unsheltered chronically homeless persons has declined. Check the report for additonal data, including for the 12 Continuum of Care regions in Minnesota.