There continues to be a startling increase in numbers of children and families in the Twin Cities finding themselves without a home, according to the latest MHP “2 x 4” Report. The report echoes the alarm sounded by newly released national data indicating a continuing increase in poverty in 2010.

The national data found poverty was up nationwide for the third consecutive year, reaching 15.1% in 2010. Ongoing unemployment has not helped matters. As of June 2011, the average unemployed worker had been out of work for over 9 months.

The impact continues to be felt among the most vulnerable here in Minnesota, according to the "2x4" report. In the second quarter, the number of homeless families in Hennepin County shelters increased 21% since last year and doubled since 2006. In addition, St. Paul and Minneapolis public schools combined identified 8% more kids as homeless in the 2010-11 school year than the year before. 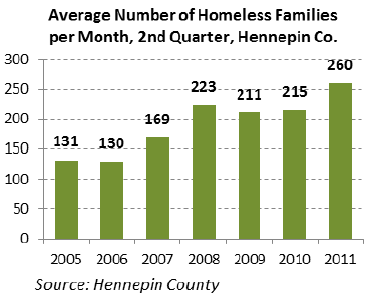 The situation may get worse before it gets better. Twin Cities rental vacancy rates fell to 2.4%, the lowest in a decade. In this tight market, rents are likely to rise. Yet low-income families already struggle to pay rent. In 2009, 58% of Minnesota renter households with incomes below $50,000 paid more than 30% of their income for housing, a level considered too high, according to HUD. 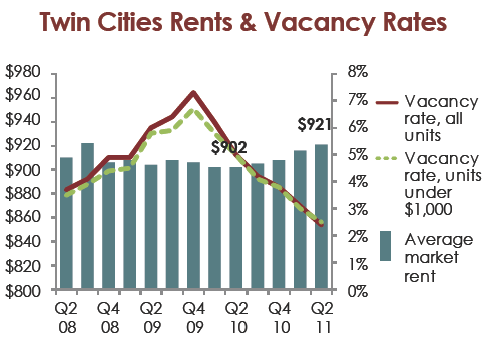 Data from the second quarter of 2011 finds:

You can read more about these housing trends in the 2011 "2x4" Report, Quarter 2. Please feel free to comment below.