If you've been following the rental market in the Twin Cities, you probably saw the headlines about a month ago that apartment vacancy rates dove down to 2.4% last quarter- a low not seen in many years. To find out just how long it's been, MHP looked to the historical data of Marquette Advisors (formerly GVA Marquette). What we found when we plotted the data surprised us, and spells concern for rental affordability. 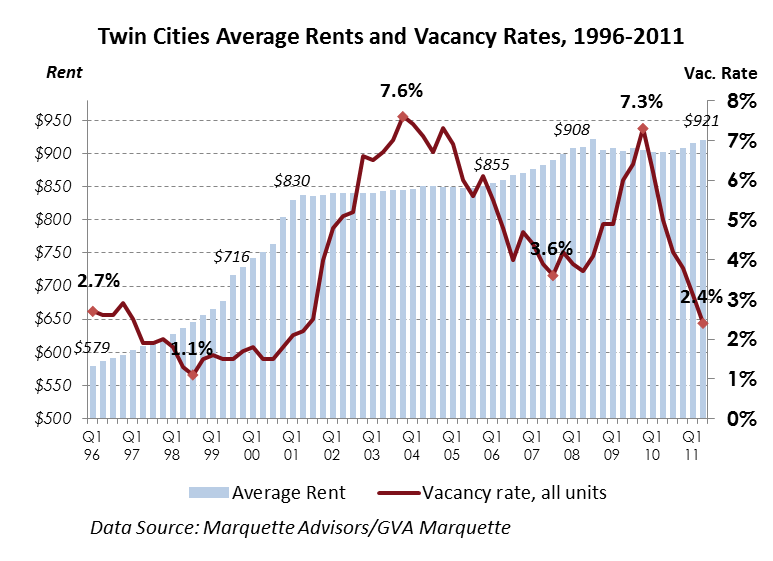 First, looking at the data over the last fifteen  years, vacancy rates have hit both high and low notes, ranging from 1.1% in the middle of 1998 to well over 7% in 2003 and 2004 and again in 2009. Yet average rents have sung a different tune: they have risen or stagnated, but haven't usually fallen much, even during times of high vacancy rates. (The one-quarter exception was in late in 2008 as the recession hit.)

Secondly, economic trends have an enormous impact on the rental market. Whether the 1990s boom years, the rise and bursting of the home ownership bubble, or the recent recession, each one makes its mark in the rental market. Here's a rundown of the trends.

So where does this leave us looking forward from mid-2011? The housing market has been anything but predictable in recent years. But with a 2.4% vacancy rate during a "modest" economic recovery, thousands of foreclosures yet to occur, and limited rental construction, we'd wager that renters will be seeing higher rents in the coming months, unless unemployment rises markedly.

Either way, the situation is concerning, especially for lower income renters. Over two-thirds of Twin Cities renter households earning under $50,000 pay more of their income than is considered affordable by HUD.

It's a good reminder of the importance of considering rental housing as government leaders think through options to promote economic growth and jobs.

Of note, both Minnesota Housing and the Metropolitan Council are in the midst of creating housing plans for the years ahead. Minnesota Housing is working on its Affordable Housing Plan for 2012 (to be adopted in October), as well as on a 5-year Consolidated Plan with DEED and DHS for allocation of federal funds for community development. The "Con Plan" will be adopted in January 2012. The Met Council will also soon be working on a housing plan, likely to carry beyond 2012.

Having these plans in process presents an opportunity to remind policymakers of the importance of ensuring decent rental options, especially for low-income folks. This could include dedicating funds to build or rehab affordable rental housing, ensuring fair treatment of renters, and preserving existing affordable units.

It's a good time to voice your concerns and ideas by contacting local elected officials, state legislators, and members of Congress. Contact MHP to find out how you can follow and participate in the planning processes underway.

Coming soon: look for another blog post about providing input on the Con Plan though an online survey.