Data for the Twin Cities indicate that the rental market is tightening as the economy improves. Foreclosed former homeowners, people leaving doubled up situations, and young people able to leave parents' homes are all increasing demand for apartments.

On the supply side, in Minnesota, only 16,400 multi-family units were issued building permits from 2006 to 2010, the lowest 5-year number since at least 1961-5, as far back as data is available. With demand up and supply down, higher rents are likely, which low-income Minnesotans can ill afford. 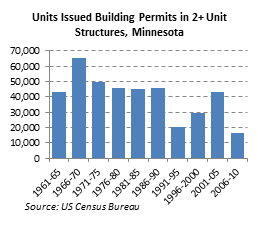 However, mortgage delinquencies and pre-foreclosure notices trended downward, offering hope that the housing market may stabilize eventually. Home prices have fallen dramatically from their 2006 peak under the weight of over 115,000 foreclosures statewide.

For the first quarter of 2011 additional data highligts included: