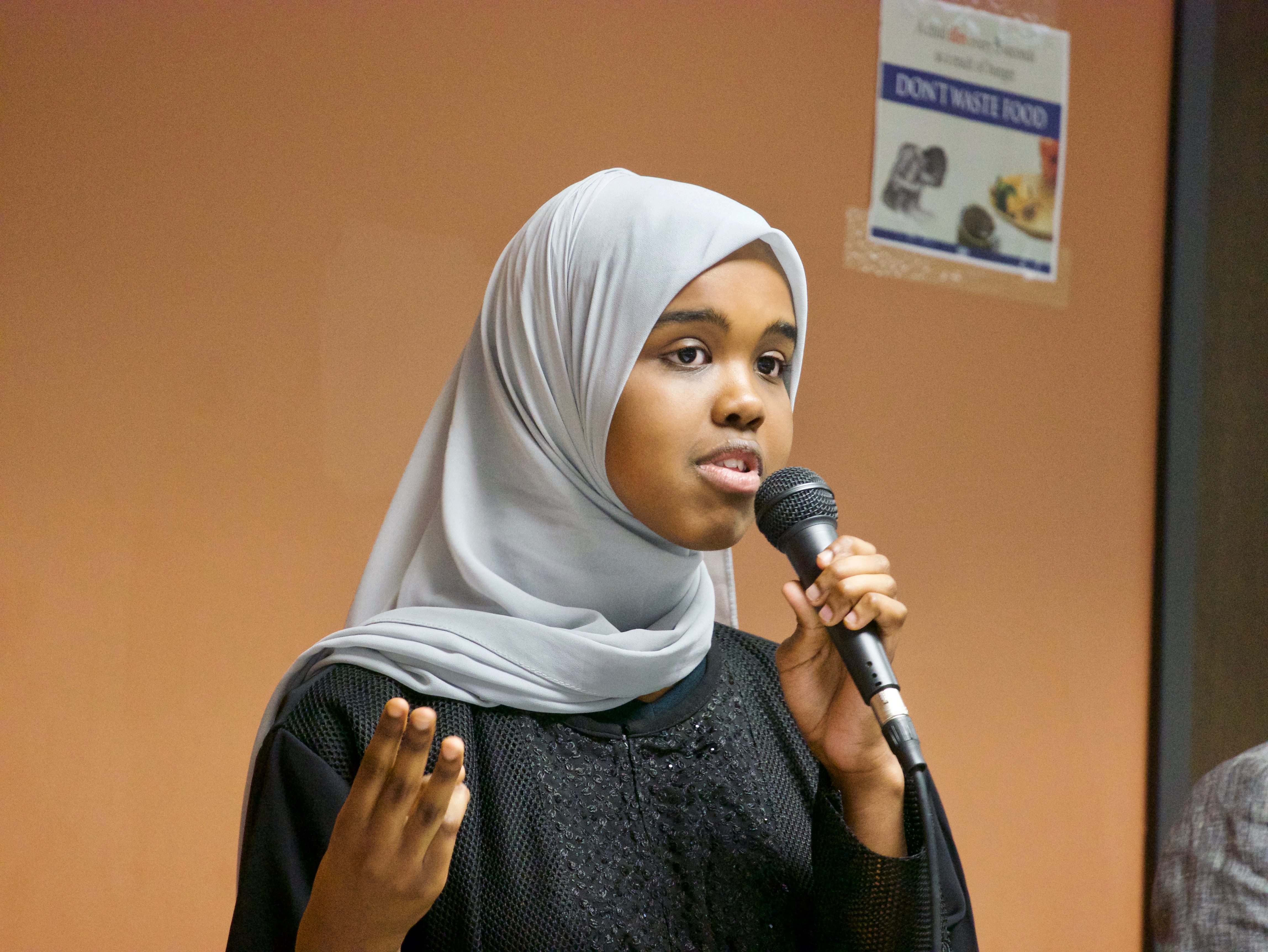 “I’m sure everyone in the audience remembers what it’s like to be a teen,” said Eden Prairie High School student Amal Adam to a rapt audience on June 21. “You are juggling a hectic life, balancing your social life, academics, and even college applications. Imagine throwing into that mix the struggle of trying to find a home. It can have an impact for years to come, which is why this is an issue that needs to be addressed immediately.”

Right: Adam speaking at the forum

Adam addressed more than 300 people convened at Al-Amaan Center in Minnetonka for a Federal Housing Forum featuring U.S. Senator Tina Smith. Local panelists shared on-the-ground impacts of housing issues in Minnesota, and discussed how to engage for change locally and in D.C.

Nationwide, more and more Americans are struggling to find an affordable place to live. There’s a shortage of affordable homes in nearly every U.S. county, according to a recent report from the National Low Income Housing Coalition. Adam argued that high school students struggling to find a stable home “are really enduring the brunt of the impact.”

“The loss of stability in their lives often translates into a lack of focus on long-term goals and academics, which is one way the achievement gap is being widened,” she said. “Additionally, poor housing conditions have been linked to physical and mental health issues because kids are struggling to find a sense of home and identity.”

For the first time in years, the Metropolitan Council Housing and Redevelopment Authority (Metro HRA) recently opened its waiting list for Housing Choice vouchers in conjunction with the St. Paul and Minneapolis Housing Authorities. They received a huge influx of applications.

“Collectively, we accepted more than 45,000 applications from low-income residents that are in need of housing assistance,” Metro HRA Director Terri Smith said. “The sad reality of that story is that, between the three agencies, there are 7,500 waiting list slots available, so do the math. That means 37,500 families won’t even get on the waiting list.”

Deidre Schmidt, President and CEO of CommonBond Communities, spotlighted one major barrier to creating more affordable homes. “We have one program in the whole country that’s scaled to induce the creation of affordable housing, and that program isn’t sized to the need — it’s set arbitrarily.” That program is the Low Income Housing Tax Credit, which, Schmidt noted, “should actually be called the ‘Moderate Income Housing Tax Credit.’”

“The Low Income Housing Tax Credit program wasn’t designed to meet the need we see most dramatically in communities: homes affordable for people making 30% or less of Area Median Income,” Schmidt explained. “The rent that is affordable to folks at that income level may cover the operating cost of a unit, but it likely won’t be sufficient to help pay for construction. Without additional rent subsidy or new capital subsidies, we’re not going to be able to produce additional units.”

Schmidt emphasized that tools must be flexible and responsive to community needs. And, to ensure effectiveness, robust investment, predictability, and consistency are key. 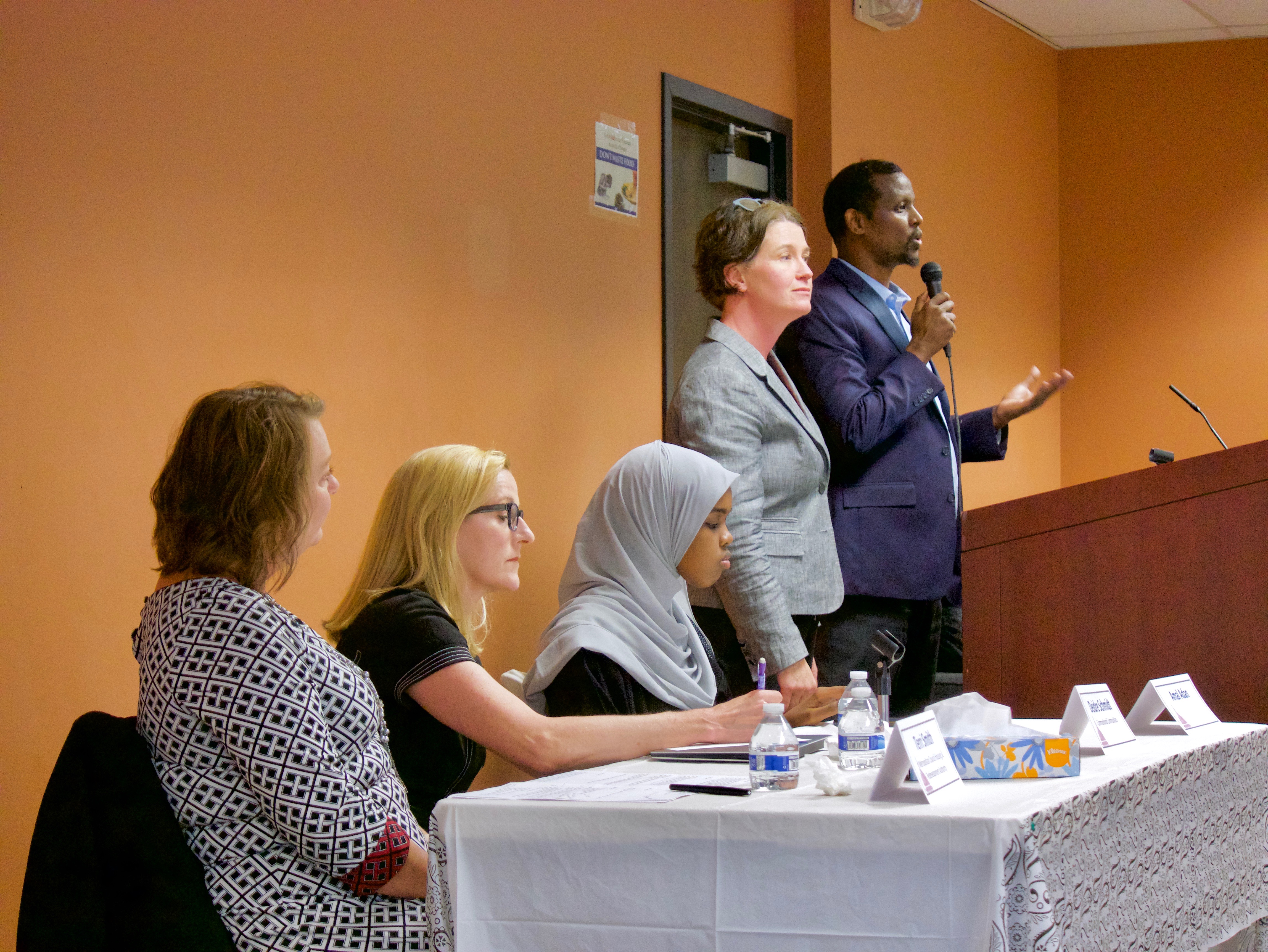 From Minnesota to D.C.

Senator Smith recognizes the deep need for affordable homes in Minnesota and nationwide. “I’ve been struck by how often I hear about the lack of affordable housing in every community I visit,” Smith said, highlighting conversations in St. Peter, Duluth, and Rochester. What she heard in these communities motivated her to join Senate Banking and Housing Committee to push for solutions. Now she’s looking to Minnesotans for more ideas. Starting in June, she is holding a series of housing listening sessions across the state.

Equal access to housing is particularly important to Smith. “In Minnesota, African Americans, Native communities, and LGBTQ youth are more likely to be homeless than their white or straight counterparts,” Smith said. “We know this has happened because of historic housing discrimination and systemic inequities.” Smith wants to address these issues by “upholding the principles of the Fair Housing Act.”

Smith also wants to strengthen the Low Income Housing Tax Credit and reform the housing finance system to ensure communities of all sizes can finance and build the housing the housing they need. For example, she supports the Affordable Housing Credit Improvement Act (S. 1703 and H.R. 3077), which would significantly boost the impact of the Tax Credit program. 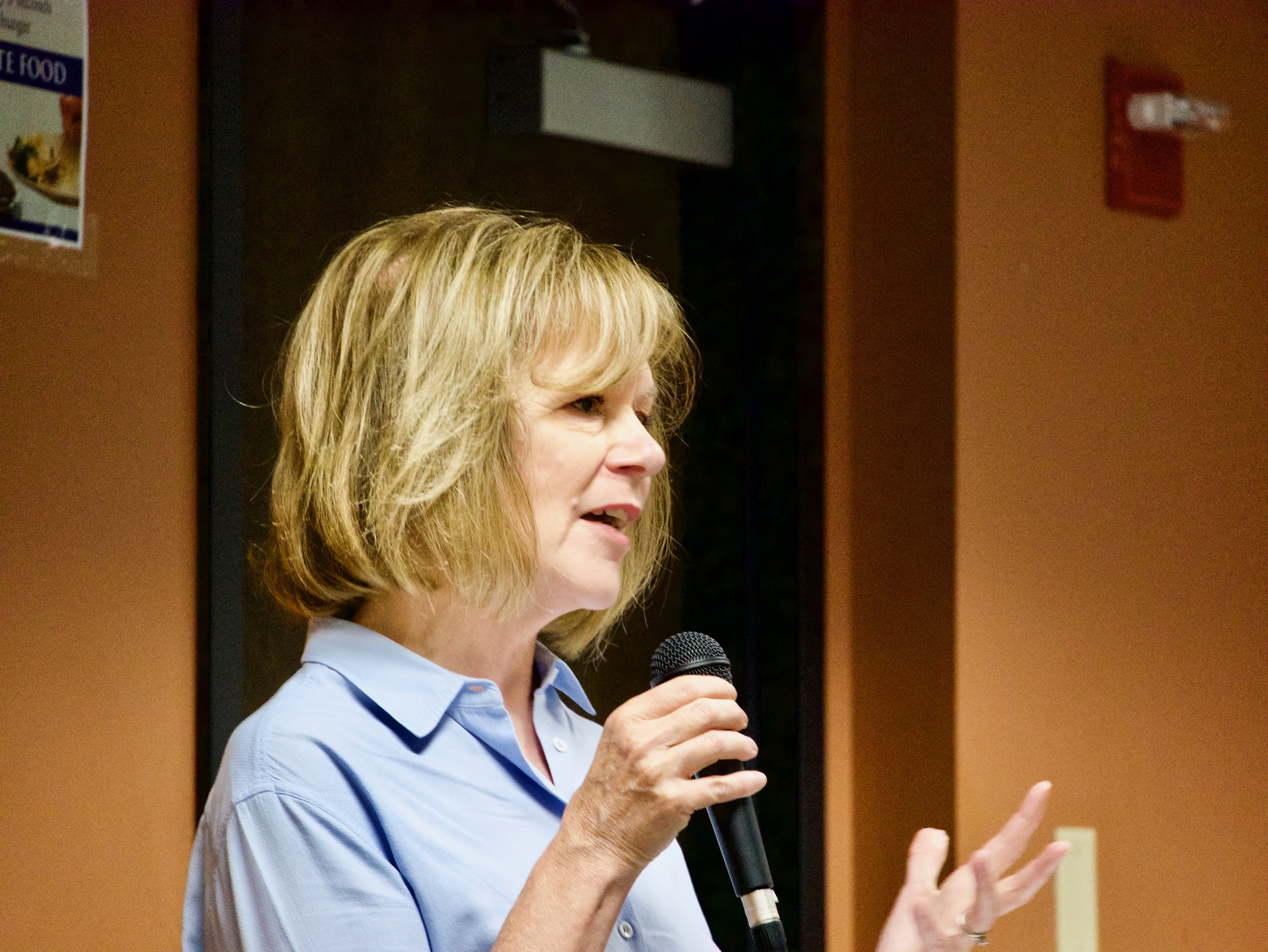 Starting at the roots

What do these federal initiatives have to do with local, grassroots work? “Local campaigns signal to federal elected officials that we need their support,” said Michael Dahl, Public Policy Director at HOME Line and moderator of the forum’s second panel, which highlighted grassroots efforts by organizations such as the Suburban Hennepin Housing Coalition; African Career, Education & Resource, Inc.; and Bloomington residents.

Panelists emphasized that people directly impacted by housing issues must drive policy solutions. “We believe that those who are most impacted by the issue are the ones who are best equipped to come up with the solutions,” said Nelima Sitati Munene, director of African Career, Education & Resource, Inc. (ACER).

By organizing tenants in the northwest suburbs of Minneapolis, ACER has worked with directly impacted community members to get City Council members to pay attention to affordable housing issues. “When we started this work, housing wasn’t even a priority among City Council members, so we had to change the landscape,” Sitati Munene said.

Richfield City Council Member and housing organizer Ben Whalen said he ran for City Council because he was frustrated that, as the City sought solutions on housing issues, they made time for landlords, but not for tenants. Whalen helped organize community members through the Suburban Hennepin Housing Coalition to pass an ordinance that requires landlords to give tenants a 90-day notice if their apartment building is sold.

“Through a series of door knocking campaigns and listening sessions, we met with tenants and gave them the opportunity to share openly about their experiences,” Whalen said. “We showed them the five strategies the city is considering and asked, ‘What do you think?’ It wasn’t just a one-time listening session. We worked to have a dialogue with tenants and created an expectation that renters are part of the process.”

While local work is powerful, Sitate Munene said solutions must be “intergovernmental” to be effective. Whalen agreed. “Four months in as a City Council Member, one thing that I’m trying to wrestle with is that our city resources are limited,” Whalen said. “There’s not enough funding, and our city development staff is only three people.” If the federal government supported more units affordable to people with incomes at or below 30 percent of Area Median Income, for example, “that would make a huge impact,” Whalen said. 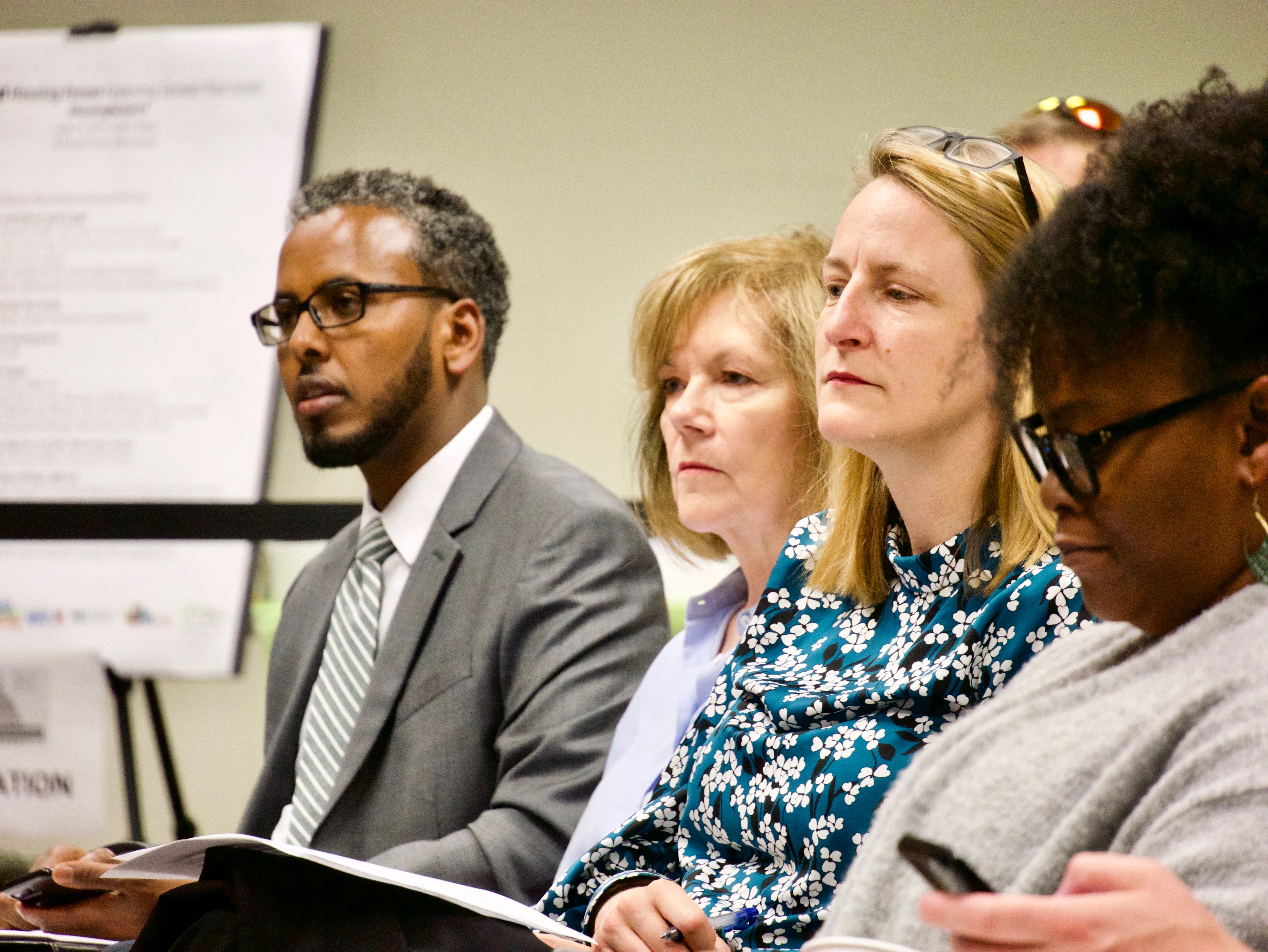 That was Amal Adam’s advice to elected officials in the room. “Teens my age don’t have a lot of power because we don’t have voting power,” Adam added. “At times, during discussions that pertain to our futures the most, it seems our voices are missing or aren’t being heard. I urge elected officials to do what you can to take time to listen to us, and take our words to heart. Use your power to make a difference in our lives.”

Adam pointed out that youth without a stable home are caught in a contradiction. “How can we really expect teens in our communities to be prioritizing their health, their future and their positions as future leaders of our communities when their home life is contradicting the high expectations we have of them? If we want to have a better future, we need to invest in our youth, and that means addressing their needs. I believe housing is one of those needs.”