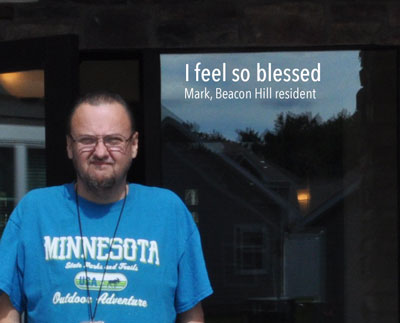 Over the past decade, Mark had lived many places he didn’t call home. A state prison cell. A cockroach-infested motel room. An apartment complex populated with alcoholics and drug addicts — two substances he’d battled himself.

He’d had setbacks with his sobriety that led to arrest and suffered a stroke that left him partially disabled.

But, at the Grand Opening of the Beacon Hill housing development last month, Mark kept repeating one phrase: “I feel so blessed.”

Mark was one of dozens of residents who moved into the new supportive housing development in Grand Rapids within days of its completion. A $9.4 million project, Beacon Hill promised to fulfill an urgent need for additional affordable and supportive housing in rural Itasca County, Minnesota. But, evidenced by the packed room of local residents and leaders from across the state, it was clear this housing project is special.

Certainly, it’s notable in its design, bringing together families with children and individuals with supportive housing needs to create a diverse but connected community of more than 120 residents. Perhaps even more exceptional, though, these 48 units are the tangible result of a unique collaboration among local leaders representing a diversity of interests, from the county to state corrections, from housing to mental health services.

In 2013, the concept for this housing community was born when seven Itasca County leaders came together for the Housing Institute — a joint initiative of Minnesota Housing Partnership and the Greater Minnesota Housing Fund. Over the course of 13 months, they didn’t just work diligently toward their goal to create Beacon Hill; they built the architecture of enduring partnerships that will benefit their region far beyond the completion of a single housing development.

For Audrey Moen, Housing Manager at Northland Counseling Center, the impact of the Housing Institute could be summed up in six words. “Many hands make for light work,” she said at the Grand Opening. “That’s exactly what happened here. We had people from many different levels and many different areas making this dream come true.”

For Mark, it was still hard to believe that Beacon Hill is his new home. He smiled and shook his head at how lucky he feels. “I told my wife, ‘One of us better go to bingo,” he said with a laugh.

From left: Grand opening of Beacon Hill, which includes 28 townhomes for families

Long before the idea of Beacon Hill, Audrey Moen was confronting a crisis.

“I was personally getting nine or 10 calls every single day from people who needed housing,” Moen said, “many of them in tears.”

For years, Moen had watched the lack of affordable housing in Itasca County grow more and more pronounced. She knew people were living in the woods, under bridges along the Mississippi River and in tents behind Wal-Mart. She knew there were people who had been couch-hopping for up to two years. And a local study backed up her assumption: The Wilder Foundation found that homelessness has increased by 22% in Itasca County from 2003 to 2013. The housing study also showed 21% of children in Itasca County were living in poverty, up from 15% in 2003.

The Housing Institute team’s hands were tied by a lack of resources.

Even with a Section 8 voucher, she explained, many potential tenants were turned away because the rent was too expensive or the landlord barred residents with criminal histories. If the rent could be covered by the subsidy and the tenant was eligible, she added, the unit often wouldn’t pass inspection — in fact, a 2015 Maxfield Housing study found that, in Itasca County alone, more than 1,200 rental units were considered substandard. Not surprising, the local homeless shelter, Grace House, was constantly at capacity, forcing people to put their name on a wait list rather than secure a bed. A safe, modest 2-bedroom apartment costs $746 per month in Itasca County, while a family can affordably spend just $582 per month on rent at the median renter household income of $23,272. By definition, half of the county’s renters earn less than this median and need less expensive housing.

Born and raised in Grand Rapids, Dale never thought he’d face homelessness. But when he returned home in 2015, he couldn’t find any place leasing for less than $700 per month. Living on a fixed income and undergoing dialysis, the only place he could afford was his sister’s couch. With six people living in a two-bedroom apartment, Dale struggled with depression and anxiety. The bills started stacking up and he fell further and further behind, but asking for help, he believed, was a sign of weakness. 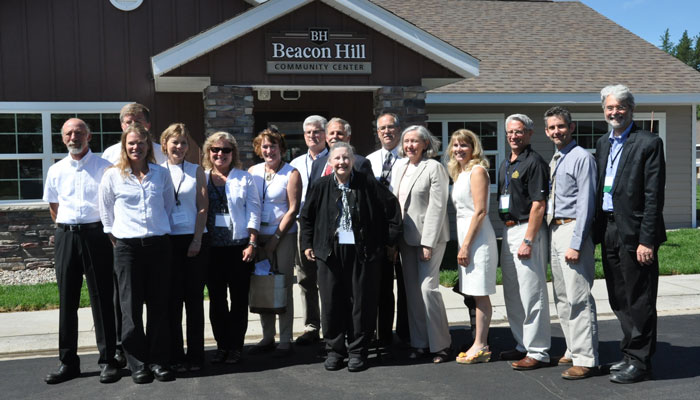 Coming together through the Housing Institute created a framework centered on collaboration that allowed them to quantify the region’s pressing housing need and rally the resources to do something about it. It took many, many meetings — 41 to be precise — but participation never waned. Each and every member attended nearly every meeting.

Thanks to that dedication, Dale has a new apartment at Beacon Hill. Instead of spinning his wheels on his sister’s couch, now he can watch his 5-year-old son ride his bike on the fresh pavement outside his spacious one-bedroom apartment. “When they told me, ‘You got in to Beacon Hill,’ I was on cloud nine,” he said. “There was nothing I had my sights set on more than having a place to call my own.”

Itasca County leaders were the first to admit that, before the Housing Institute, they rarely worked together in meaningful ways. “We had long been accused of working in silos,” acknowledged Diane Larson, Executive Director of the Itasca County Housing and Redevelopment Authority. “One of the greatest assets of the Housing Institute was bringing partners together, many of whom were not actual ‘housers’ but were important to housing in our community. The education provided to these non-housers is what made our collaboration such a success.”

That collaboration included the Institute’s in-person workshops, regular check-in meetings and even road trips. With the Department of Corrections at the table, the team toured a state prison to understand the challenges and needs of those with criminal records. They traveled to view supportive housing developments in other communities to hone their vision and learn best practices.

Supported by MHP’s Community Development Director, Rosemary Fagrelius, the team came to understand the development process, and how to plan and implement a successful project. That included engaging a developer — and Skip Duchesneau of D.W. Jones Development, Inc. worked with the team to assemble an application for funding. It also included making the case for the project to potential funders and the community. To that end, the team contracted with Maxfield Research Group, Inc. to conduct two studies: an assessment of the market demand of Beacon Hill and a broader, more comprehensive housing market analysis for the City of Grand Rapids. 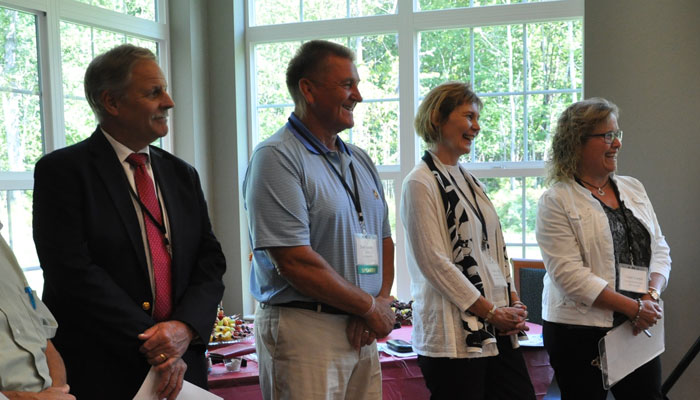 Both studies supported the development of the proposed project. At the Grand Opening, a representative from American Bank reflected on the impact of that analysis. “I remember reading the assessment when my door was closed and there were tears,” she said.

With a united team dedicated to the development, the wider community rallied to support the project, too. City, county and even state officials worked together to ensure Beacon Hill had the land and dollars it needed.

“We collaborated in a strong team approach, working on a clear vision and the mission of what we needed to accomplish,” Moen said. “This was one of the best collaborative efforts I have been involved in over the past 30 years in human services.”

Having worked in the field for many years, even Duchesneau was impressed. “To get funded the first time on a complex project like this is really amazing,” he said at the Grand Opening. “It’s not a mistake that this happened.”

It’s not a typical affordable housing development, either.

The 48 units at Beacon Hill are intended for different types of households: 28 units are for families with children, while the other 20 units are apartments embedded in a supportive structure that, in some cases, includes around-the-clock access to care. According to Warren Hanson, Executive Director of the Greater Minnesota Housing Fund — a partner in the Housing Institute — that spectrum of residents isn’t common.

“I was marveling at the beautiful design of the project in terms of the building themselves,” he said. “But then I started to think about the fact that you have family housing, you have formerly homeless housing and housing for people with disabilities — that’s incredibly inclusive and it’s making connections that don’t happen in day-to-day life. But it’s built right into the design here.”

That prospect has inspired Moen, too. During a tour at the Grand Opening, she stopped in the Community Center, a space with a kitchen, gathering area and conference room that can be accessed or reserved by tenants. “Can’t you just see people playing games and getting together to have socials here?” she said. The seeds of those social bonds have been planted early, with residents from the townhomes and apartments gathering at the playground. “We’ve already seen them starting to build that community,” Moen said.

With the variety of stakeholders at the table, the Housing Institute team understood that sustaining that community would take a village. At Beacon Hill, the two property managers live on-site, in additional to eight full-time staff and a cook who provide a variety of services, from three meals per day to Peer support, case management, housing support and Adult Rehabilitative Mental Health Services. That team approach to the tenants’ success was a critical factor in D.W. Jones Management opening Beacon Hill’s doors to residents who might not be welcome elsewhere.

The team hopes to continue those successes beyond Beacon Hill, as well. Dana Herschbach, Director of Asset and Housing Development at KOOTASCA Community Action, is already thinking about what’s next.

“One of the great things to come out of the collaborative effort is we know and trust each other now,” he explained. “The HRA and KOOTASCA were never partners but now we work well together. I have a dream for senior housing and I’m thinking of moving forward with that. As I do, I know I can turn to any of these team members.”

In the meantime, that team is already having a lasting impact on the lives of Beacon Hill residents. At the closing of the Grand Opening a staff member couldn’t help but share a short anecdote. On August 1, she picked up one of the Beacon Hill residents to bring him to his new home. He had suffered long-term homelessness — living out of his van when shelters were full. When they pulled up to Beacon Hill, he was in disbelief. Is this real? he asked. Is this really happening?

The staff member paused. “He is now housed,” she said blinking back tears. “He is so happy. This is how this project has impacted people’s lives.”