Ahead of the Curve: Data drivers for housing in Minnesota 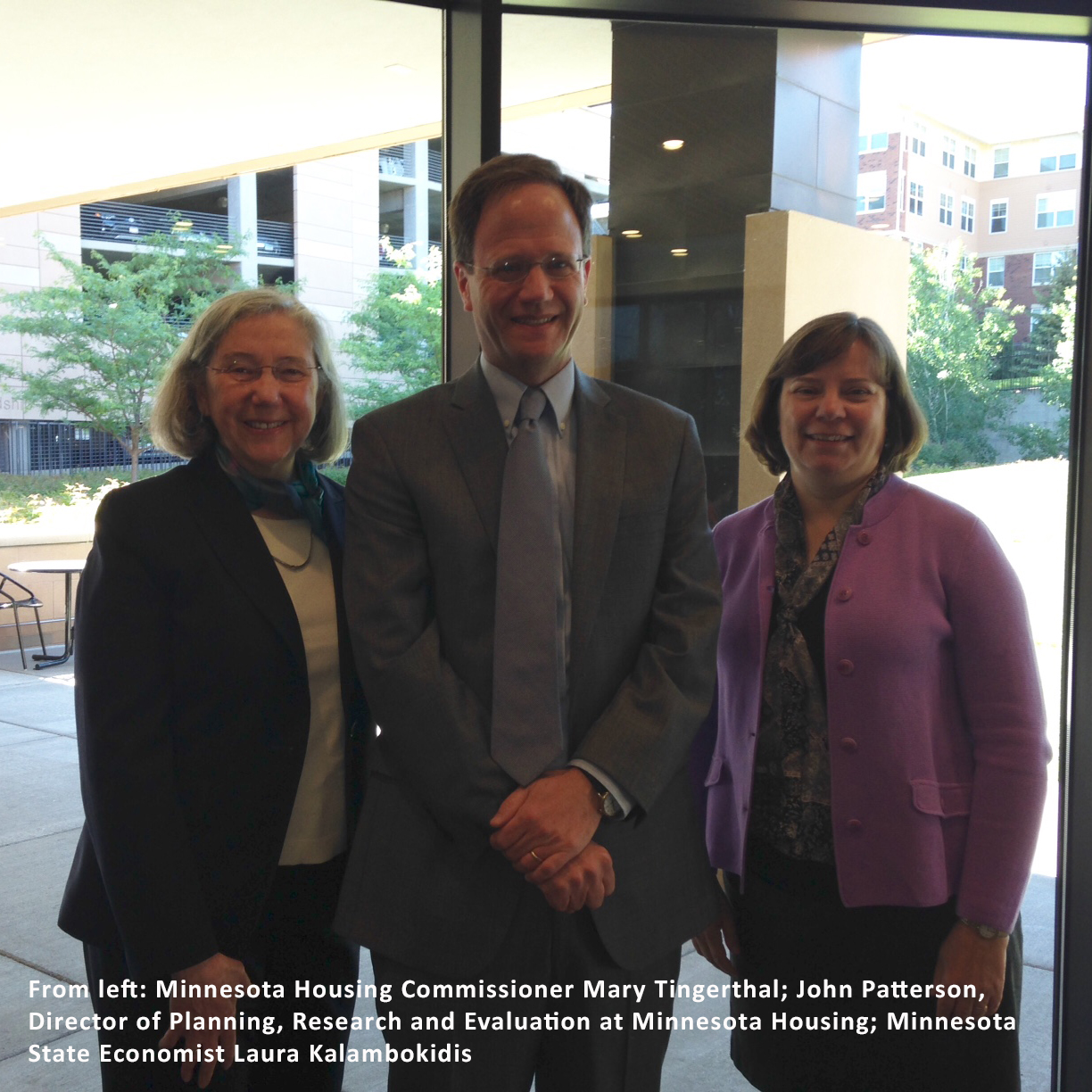 “Now is a pivot point for the economy and the housing market,” Minnesota Housing Commissioner Mary Tingerthal said. “There are big issues emerging.”

This week, at MHP’s latest Investors Council breakfast, more than 100 developers and advocates came together to look beyond the chaotic legislative session and consider emerging trends that impact housing across the state.

In her presentation, Kalambokidis noted that Minnesota has weathered the global slowdown reasonably well. While real GDP growth has been moderate, it has been even slower in other countries, attracting investment to the U.S. and effectively strengthening the dollar.

Economic expansion is expected to continue in the U.S. — especially in Minnesota where we have a diversified economy. Job growth and low interest rates have led to an increase in consumer spending; because of this, we can expect real GDP growth, which will feed into the housing market. This not only creates demand for more housing (as people likely move here for jobs), but it also means more Minnesotans are able to pay for housing.

However, the labor market is continuing to tighten. Employers will thrive if they find those pockets of unemployment and utilize them. Due to demographic trends, Minnesota has had very slow labor force growth, due to the aging of the baby boomer population. As the market tightens, demand increases for labor and supply decreases.

The new task for companies will be to find ways to attract workers, and, in our current state, productivity matters even more. This means we will need to make further investments in areas like health, education, and infrastructure (including housing) to attract and retain employees. Minnesota cannot afford to leave any workers behind.

As the housing market picks up, the state needs to make sure that we create opportunities for all people to find homes. Household formation is increasing, meaning there are more people looking for long-term stable housing. Unlike the past, though, household formation was greater among renters than homeowners in recent years. However, fewer new multifamily units were added to the market during the recession, and this continues to limit housing options and decrease housing affordability.

Low vacancy rates have been conducive to rising rents; and while multifamily housing has remained somewhat stable since recovering from the recession, the market for single family housing remains greatly affected. Although demand has shifted since the recession with an increased demand for rented units in contrast to owning units, very little production has occurred of rent available buildings because of the crash.

Currently in the Twin Cities metro area, owning a home is more affordable than it was in 2006. Particularly when viewing the market through a demographic lens, the bulk of the population is currently in a transitional phase when they are either exploring homeownership or “leaving” their home due to aging. Historically beginning at the age of 25, today that the transition is occurring later and later. This is likely a result of the recession’s impact on that age group.

In Minnesota, as well as across the U.S., the percentage of people of color is increasing. Minnesota has one of the largest gaps in homeownership between white and other races. Closing that gap and supporting homeownership across all races will build equity in the state.

Click here for the full presentations from Kalambokidis and Patterson.