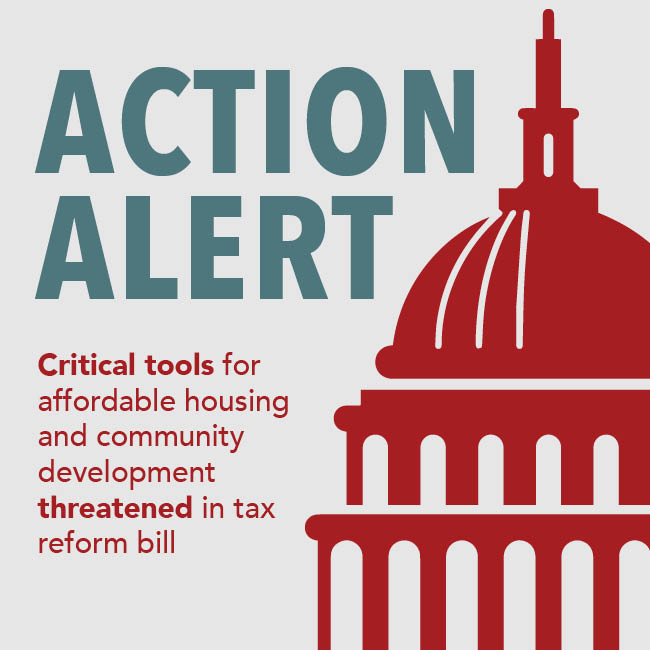 Federal tax reform is moving ahead at full steam. Here’s a rundown of how the House and Senate bills impact affordable housing and community development — and what happens next.

This Thursday, the U.S. House of Representatives plans to vote on H.R. 1, the Tax Cuts and Jobs Act.

This bill would deal a major blow to affordable housing development — and therefore the health, wealth, and stability of communities across the country — if passed in its current form. Over the next 10 years alone, H.R. 1 would eliminate nearly 1 million affordable rental homes, over 1 million jobs, and nearly $100 billion in business income nationwide, according to analysis by Novogradac & Co.

The House bill undermines affordable housing and community development by:

There’s still time to speak up and tell your Representative that you won’t accept a tax reform bill that deepens the affordable housing crisis. Your voice is important. Rep. Erik Paulsen (R-MN) voted yes for the bill in the Ways and Means committee — and no Minnesota Congressperson is a no vote on any roll call list.

The U.S. Senate is working to finish markup of their version of the Tax Cuts and Jobs Act by the end of the week. According to Majority Leader Mitch McConnell, the Senate will vote on the bill after Thanksgiving.

Because the Senate bill preserves private activity bonds, it’s less detrimental than the House bill overall. However, it still severely exacerbates the affordable housing shortage and undermines the affordable housing sector. According to Novogradac & Co. analysis, the bill would reduce affordable rental housing production by nearly 300,000 homes over the next 10 years, and therefore, result in the loss of more than 330,000 jobs and nearly $30 billion in business income. Minnesota alone would lose 4,550 affordable rental homes, more than 5,000 jobs, and more than $400 million in business income.

The Senate bill undermines affordable housing and community development by:

Call these Senators to speak up for tax reform that invests in affordable housing and strong communities. They’ve expressed reservations regarding the proposed reforms and need to hear from you now.