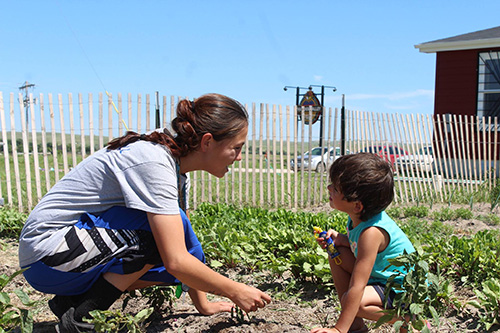 Lakota youth leadership development program participant and child.Over the years, TVCDC has taken on a wide range of projects aimed at tackling the largest issues on the reservation. The organization has established a Food Sovereignty Initiative, supported the creation of a language immersion childcare program, implemented a Lakota youth leadership summer program, and provided skills training to dozens of young adults, allowing them to take hold of their future, support themselves and contribute to the growing reservation economy.

All this is accomplished through a systems-based development approach with a "triple bottom line": people, planet, and prosperity.

For Tilsen and his team, the triple bottom line has meant weaving complex systems (people, housing, health, and jobs) into a cohesive and self-sustaining whole—or, what Tilsen refers to as an “ecosystem of opportunity.”

One of the key parts of creating such an ecosystem is a commitment to environmental sustainability, a value that Tilsen says was deeply ingrained in Lakota tradition long before the “green movement” began.

“We believe the design world is changing and that we’re able to leave our imprint on history by leading and working alongside that change. We’re defining what Lakota architecture is and making history in the process.” -Nick Tilsen

The Regenerative Community Development, an infrastructure and housing development project that broke ground last June, exemplifies the community's pacesetting work. The entire project is designed in relationship to the sun. The structures and facilities on the site will be largely solar-powered, just one of the project's many design features that revive centuries-old indigenous architectural practices.

The defining characteristic of TVCDC's development model, however, is its community engagement practices, especially its engagement of Lakota youth. Over fifty percent of the tribe's population is age twenty-five or younger, which Tilsen explains comes with its own set of challenges, but also unique opportunities to develop leaders within the community. TVCDC runs several youth development initiatives aimed at fostering leadership and creating economic mobility for Lakota youth.

Twenty-six year old Eric Brown Bull participated in the first round of TVCDC's construction training program. Upon completing the training, Eric and his peers will have associate degrees in General Construction, a small pool of savings to put toward further education or creating their own businesses, and, most importantly, new employment opportunities.

"There is always a good feeling being here [at the training site] and working with the other people in the program. The instructors are great and have taught us a lot. It's nice to be busy and have work to do. Many people have doubts about this place, but I think when they see the houses being built, it changes something, maybe gives people hope." -Eric Brown Bull, participant in the Workforce Development Through Sustainable Construction Program

While the majority of development ideas come from within the community, TVCDC also has an expert team of architects, planners, and outside consultants who work to make the ideas a reality. Some of the key players in the development of the Regenerative Community are: BMI Architects, Pyatt Studios, and KLJ Engineering.

“We fully believe in integrated design and we have an amazing team behind us. Not every architect or every engineer could be a part of what we’re doing. Everyone on our team has been great listeners and very patient. We couldn’t do it without their work and the way they are doing it.” -Nick Tilsen

MHP began working with Thunder Valley CDC in 2012 through the HUD Sustainable Communities Initiative. In 2013, MHP was awarded a HUD Rural Capacity Building grant to continue providing assistance to TVCDC on activities related to its Regenerative Community Development project.

MHP has provided assistance to develop a sustainable business model with programs that ensure a strong financial future for the organization; assisted in board and staff development; helped secure funding for infrastructure and housing construction; advised on single family housing development for first time homebuyers; and advised on infrastructure development.