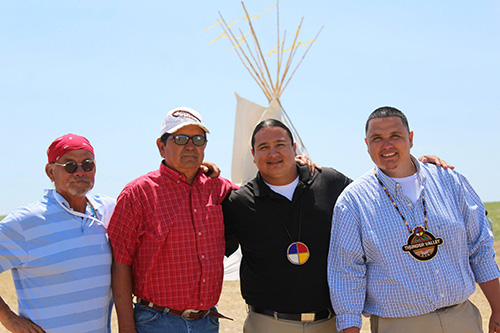 Lakota Elders and Executive Director Nick Tilsen (pictured third from left) at the Regenerative Community Groundbreaking.In 1889, the United States government forced the Oglala Lakota Nation onto a military guarded patch of land established as the Pine Ridge Indian Reservation. Over 125 years later, the reservation is still home to the Oglala Lakota Nation, yet many areas still do not have necessary infrastructure. A critical lack of housing push economic activity off the reservation, creating long commutes that perpetuate cycles of poverty and burden families with immense transportation costs.

Infrastructure issues on the reservation have been exacerbated by a long history of failed state and federal policy, convoluted land rights issues, and a pervasive neglect and misunderstanding of the issues facing the Oglala Lakota people and Native communities across the United States.

“Our people deserve better than this,” says Nick Tilsen, Executive Director of Thunder Valley Community Development Corporation (TVCDC). “And, although we are up against some very real struggles, we are 100% committed to the work ahead.”

A pragmatic “roll up your sleeves” attitude combined with a deep commitment to community engagement is what guides the work of TVCDC. Since its founding in 2007, the organization has sparked a revolution within the Oglala Lakota Nation, building economic prosperity, and strengthening community vitality through a truly comprehensive, grassroots approach.

Click the buttons below to read more about TVCDC's development model and its mission in action.

MHP began working with Thunder Valley CDC in 2012 through the HUD Sustainable Communities Initiative. In 2013, MHP was awarded a HUD Rural Capacity Building grant to continue providing assistance to TVCDC on activities related to its Regenerative Community Development project.

MHP has provided assistance to develop a sustainable business model with programs that ensure a strong financial future for the organization; assisted in board and staff development; helped secure funding for infrastructure and housing construction; advised on single family housing development for first time homebuyers; and advised on infrastructure development.