MHP is an equal opportunity provider.

Higher Ground: Changing Lives One Floor at a Time 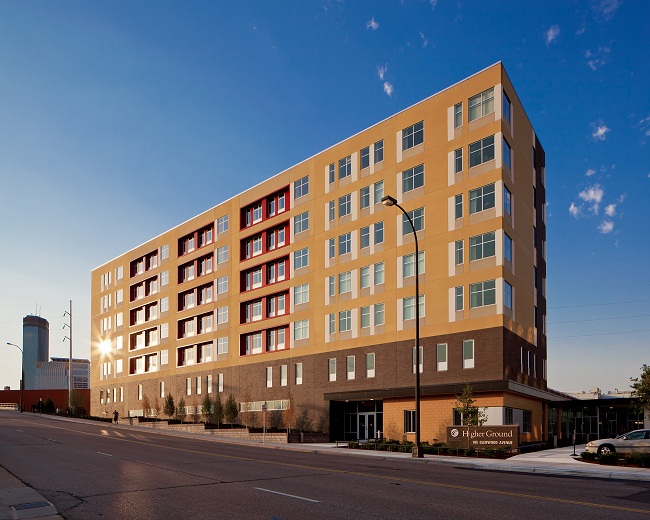 October 2012 |  The first of its kind in Minnesota, Catholic Charities' new Higher Ground gives residents an opportunity to move out of homelessness by combining permanent housing and emergency shelter in one building.

The building is designed to serve people at different stages of the housing continuum, whether they need overnight emergency shelter, a supportive housing environment or an efficiency apartment of their own.

The development consists of:

The building will replace Secure Waiting Space, a temporary shelter created in 1995 to provide people experiencing homelessness a place to sleep. Individuals seeking shelter at Secure Waiting Space used to be given a mat on the floor, sleeping inches apart from others.  Higher Ground provides a more dignified and comfortable sleeping environment for shelter users. 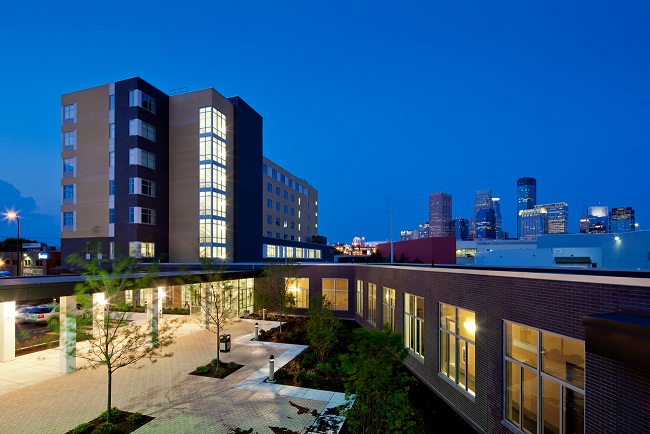 Sitting in the sixth floor lounge of Higher Ground, enjoying the wide view of downtown Minneapolis, Joey recalls the ups and downs in his life and how thankful he is to be here.

A native of Mississippi, Joey came to Minnesota to live with family. Always a hard worker, he found a job right away and started to make a life for himself, but soon fell into depression due to a health condition. After spending time in and out of jail, Joey decided to get his life back together and go back to school. In 2000, Joey graduated from Alcorn State University with a degree in business administration and finance.

Though Joey held a part time job, school loans made it hard to pay for his basic needs, so he sought shelter in Catholic Charities Secure Waiting Space on the pay-for-stay floor. For $6 a day, Joey could take a shower, get a snack and rest. Like many of the men staying on that floor, Joey would come in at 5:00 p.m. after a long day at work and try to sleep in the crowded and loud room. In 2008, he was laid off from his job and forced to find another way to pay for his bed. He started volunteering doing laundry and occasional work in the kitchen at the shelter, which helped him to secure a bunk.

"You don't feel whole when you're constantly struggling," says Joey. "I'm not a lazy person and I always want to be doing something to better myself."

Because of his determination to work hard, Joey was one of the first tenants to call Higher Ground home. Living in a single room occupancy apartment, he has his own bed, wardrobe, dresser, refrigerator, microwave and sink.

"I haven't had a stable home in a long time," says Joey. "Now I can come here, I have my own home, my spot where I live. It sounds good to be able to say that."

Joey is among the 53 men now living full time at Higher Ground. They have access to job skills training, mental health support services, housing assistance, a computer lab and medical care. The goal of Higher Ground is to give people experiencing homelessness the tools they need to become productive members of society – the perfect stepping stone Joey needed.

"The changes here make you feel more like a person, you don't feel homeless," says Joey. "Now, it's easier to wrap your head around something positive."

As Joey continues working towards his goals, he says his stay at Higher Ground will only be temporary.

"This is my step up to the next level," says Joey. "I went from a mat, to a bed and now my own room. It's my sanctuary to collect my thoughts and be confident in moving forward."