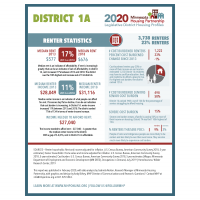 As a key leader in the Homes for All Coalition, MHP will be at the state capitol this session making the case for robust investments and smart policies that advance housing. Whether we engage in person or online, when we advocate for #Homes4AllMN, lawmakers need to know what’s going on in the communities they represent. MHP’s Legislative District Housing Profiles are an essential resource, providing data on housing measure for all 134 legislative districts across the state.

While each district is unique in its challenges and opportunities, some troubling trends hold true. Utilizing data from the 2018 American Community Survey, there is a continued rise in housing costs, increasing numbers of families paying more than they can afford on housing costs and, in some districts, declining income for renters and homeowners.

Cost burden, the percentage of renter households that spend more than 30 percent of their income on housing, is pervasive across the state impacting at least 27% of renter households in every legislative district across the state, and as many as 60% in District 59A in the Twin Cities region. Senior renters are increasingly affected by cost burden in every district, with as many as 80% of seniors in District 39B in the Twin Cities paying more than they can afford.

Read more district highs and lows below — and download YOUR legislative district profile in the column on the right. Don’t know your district? Find out here!