In the final days of the 2015 legislative session, Minnesota Housing Finance Agency’s budget faced uncertainty. Lawmakers released the Jobs/Energy bill, in which Minnesota Housing’s budget is included, with less than an hour before the Legislature’s adjournment deadline of midnight on May 18. The House took up this “lights on” bill in the final minute of session.

The bill maintained Minnesota Housing’s base level funding and secured an additional one-time $2 million to the Challenge Fund for the Governor’s Housing and Job Growth Initiative and an additional one-time $2 million to the Housing Trust Fund for the Homeless/Highly Mobile Youth Student Project. A veto from the Governor – related to other portions of the Jobs/Energy bill – loomed even before session adjourned. After several days of deliberation, Governor Dayton vetoed the Jobs/Energy bill and the 2016-2017 budget for housing is still unsettled.

The Governor’s veto means there is uncertainty about Minnesota Housing’s budget, but MHP is optimistic that the bill that is now being negotiated between the Governor and Legislative Caucus Leaders will maintain the additional $4 million for the Housing and Job Growth Initiative and the Homeless/Highly Mobile Youth Student Project. Additionally, Governor Dayton released a statement saying he and Legislative Caucus Leaders had agreed to appropriate more funding for the Bridges program, which helps prevent Minnesotans with mental illness from becoming homeless.

At the Capitol, rumors are currently circulating that Governor Dayton will call a special session this Friday. Look for upcoming blog posts on the Jobs/Energy bill and Minnesota Housing’s budget. Follow MHP on Twitter for up-to-the-minute updates. 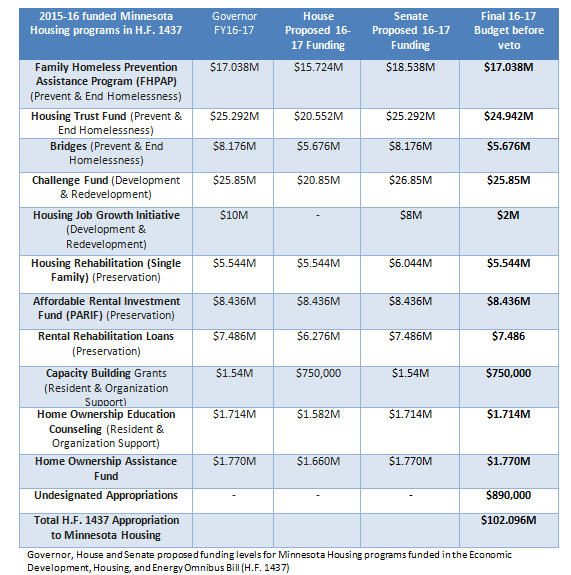