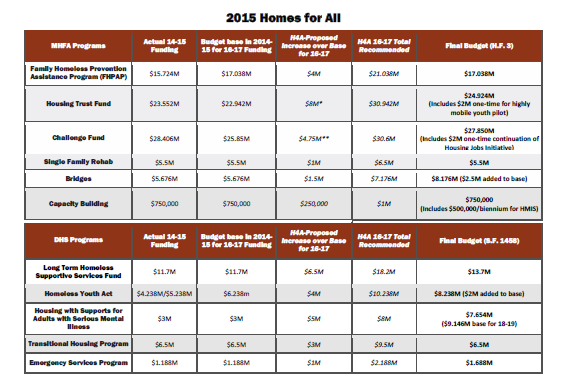 At the Capitol this year, MHP worked with Homes for All to increase funds for housing across the spectrum of need. MHP and Homes for All asked legislators to budget an additional $39 million for housing development and supportive housing services to meet housing needs of the homeless to moderate-income workers. Ultimately, Homes for All met with success again this year in securing an additional $25.5 million in funding. Funding included $15.5 million in budget appropriations for housing and human services programs plus $10 million in bonds for housing, which was a welcome outcome of end of session leadership negotiations. Ultimately, Minnesota Housing and DHS will benefit from $36.5 million more in 2016-17 than in 2014-15 for these selected programs.*

In the final days of session, housing advocates waited eagerly for the Economic Development, Housing and Energy Conference Committee to meet and produce a “Jobs/Energy bill” with funding for Minnesota Housing. On the last day of session, Governor Dayton, Senate and House leadership, and committee chairs were still negotiating compromises behind closed doors, leaving the conferees and the public in the dark about the contents of the final bill. Rumors that the legislature would never take up a Jobs/Energy Bill or that a “lights on bill” was being drafted circulated until the final hour. Finally, in the last half hour of session, Senate staff distributed copies of the Economic Development, Housing, and Energy Omnibus Bill. Most senators had little or no time to read the bill. After the Senate passed an amended version of the bill and with three minutes until midnight, a staffer literally ran the bill to the House Chambers. Speaker of the House Kurt Daudt called the House to a vote and, despite objections by House members who didn’t even have a copy, the House passed the bill.

The “lights on bill” that passed on May 18 secured an additional $4 million for programs in Minnesota Housing. Governor Dayton’s veto, soon after the close of regular session, of the Jobs/Energy bill left advocates uncertain about the future of Minnesota Housing’s funding for the next biennium. After weeks of negotiations with the four Legislative Caucus Leaders, Governor Dayton called a special session on Friday, June 12.

In the end, lawmakers agreed to appropriate an additional one-time $2 million to the Governor’s Housing and Job Growth Initiative to finance affordable and workforce housing. Lawmakers also appropriated an additional one-time $2 million for the Homeless/Highly Mobile Youth Student Project to provide temporary rental assistance for families with school-age children who have changed their school or home at least once in the last school year.

As part of pre-special session negotiations, Governor Dayton also requested including more funding for Bridges to help the state further its Olmstead Plan efforts to address the needs people with disabilities. The special session Jobs/Energy bill (H.F. 3) increased funding for Bridges by $2.5 million per biennium. Bridges helps provide housing for people with mental illness experiencing chronic homelessness. The final outcome resulted in Homes for All securing an additional $6.5 million for programs in Minnesota Housing. Senator Tomassoni, chair of the Environment, Economic Development and Agriculture Committee, said that he wished the bill had done more for housing but that he believed what was in the bill “is adequate.”

Bonding gets a boost

When the regular session adjourned a bonding bill had not passed both houses and, therefore, was not part of the package of bills sent to the Governor. Prior to the special session, Governor Dayton successfully negotiated a public works spending bill. H.F. 2, which passed in the special session, gives Minnesota Housing authorization to issue up to $10 million in Housing Infrastructure Bonds (HIB). HIBs can be used to finance the acquisition, rehabilitation, stabilization, or construction of affordable housing for particular uses. In an interview with Senate Media Services, Senator Stumpf, chair of the Senate Capital Investment Committee, said “next year we’re going to have to make a much bigger attempt” at housing.

*The victory of $25.5M in additional funding is compared to the program “base” funding originally slated for 2016-2017 during the previous budget cycle, and corresponds to goals set by Homes for All this year. The actual budget increase for the coming biennium will be $36.5M for these selected programs compared to last biennium.