Whether by choice or necessity, more and more people are renting across Minnesota. By 2010, 27% of the state’s households rented their homes, up significantly from mid-decade, according to MHP’s 2011 County Profiles, just released today. What’s more, Hennepin and Ramsey counties are by no means the only counties where renting is important. 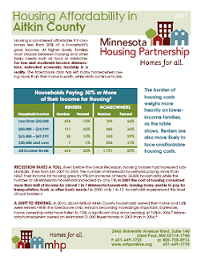 The County Profiles show that only two of the top ten counties with the highest rental rates in Minnesota are located in the Twin Cities metro.

Over the course of the decade from 2000 to 2010, all ten of the counties with the largest increase in the percentage of renter households were outside of the metro area. Mahnomen, Big Stone, Mower, and Beltrami counties head up this list.

MHP’s County Profiles pull together housing data for each of Minnesota’s 87 counties—including cost and affordability for owners and renters, changes in home prices, foreclosures, homelessness, and unemployment.*

Check out your county profile and the Top Ten lists. Do you see any surprises? Also, we welcome you to share ideas about how you plan to use the County Profiles this coming year.